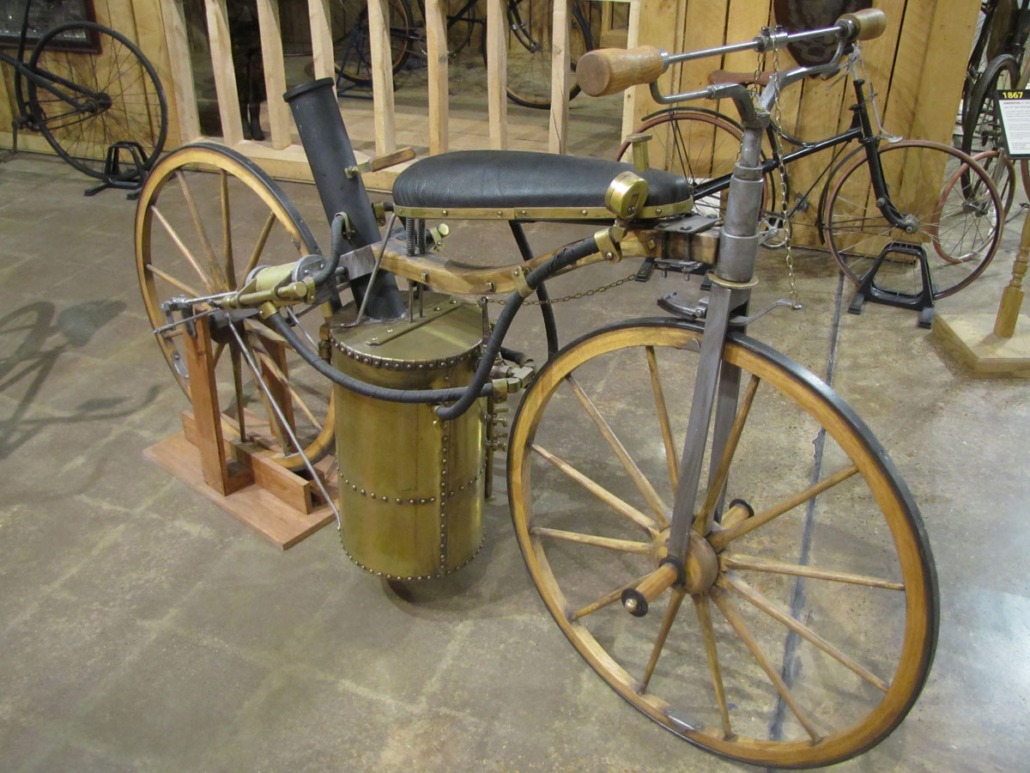 Long before internal combustion engines were perfected, steam engines were the motive power source of choice. So when inventors sought to ease the effort involved in moving people or goods down the road they applied steam power to wagons, buggies and bicycles, and, using terminology loosely, created trucks, automobiles and motorcycles.

The son of a craftsman, Sylvester Roper worked in eastern Massachusetts and from his youth designed a wide range of machines. He is regarded as the first American* to invent the motorcycle; a hickory framed, iron clad steel wheel machine with a two-cylinder steam engine and boiler he rode successfully in 1869, just four years after America’s Civil War.

Since the Smithsonian owns Roper’s original steam cycle, what you are looking at here is a recently built replica created by William Eggers that gets the point across as to the general layout of Roper’s machine. The firebox was likely stoked with coal creating steam in the boiler above. The seat serves as a water reservoir. Steam to the cylinders is controlled by something like a twist-grip** with the entire handlebar’s rotation controlling steam flow. When turned in the opposite direction, the front wheel’s spoon brake is applied. Roper’s frame is roughly that of velocipedes of the time, yet is mimicked by the “perimeter frame” which BMW used in the 1930’s and reappeared in Superbikes in the 1980’s.

Unlike a gasoline engine’s operation, a charge of steam is very immediate and powerful. As the steam reached the cylinders, the pistons in the cylinders began their stroke. Tied to small cranks via connecting rods, you can see how the force rotates the rear wheel. The action is much like that used for steam locomotives.

Around 1896, after he saw Roper’s 1884 era machine, Colonel Albert Pope commissioned Roper to make a pacer cycle for bicycle velodrome racing. Pope supplied a large Columbia bicycle frame to Roper who installed the boiler, a single steam cylinder and other necessary equipment to drive the rear wheel. Period accounts offer that Roper’s 1884 machine may have made an impressive 8 horsepower, had a range of seven miles and may have traveled in excess of 40 miles per hour, very rapid for the period.

Riding the Columbia-based machine in a demonstration on the Charles River (Massachusetts) velodrome track he was timed at about 40mph. Rolling to a stop, Roper and steam cycle toppled to the ground. He had died of heart failure at age 72.

Roper innovated the first motorcycle over 150 years ago; we can credit him with the passion, ambition and inventiveness to bring us the machine we enjoy so much.

This replica of Roper’s first steam motorcycle is part of the Early American Transportation INNOVATION exhibition recently opened at the Museum. It is nearby bicycles similar what it’s derived from and is also near more sophisticated motorcycles from the first 20 years of the 20th Century. The STECO Aerohydroplane and Cycle Car are also part of the show.

*In France Louis-Guillaume Perreaux experimented with a small steam engine in a bicycle frame, contributing to the invention of the first motorcycle. Perreaux patented this design under number 83,691 on 16 March 1869 and the argument continues as to who was first, but Louis-Guillaume Perreaux’s machine achieved less than 10 MPH. Gottlieb Daimler used a gasoline engine of Otto design and is credited with the internal combustion engine powered motorcycle, about 1885.

**Glenn Curtiss, aviation pioneer is credited with the twist-grip throttle, but that he applied to internal combustion engines on his early motorcycles.