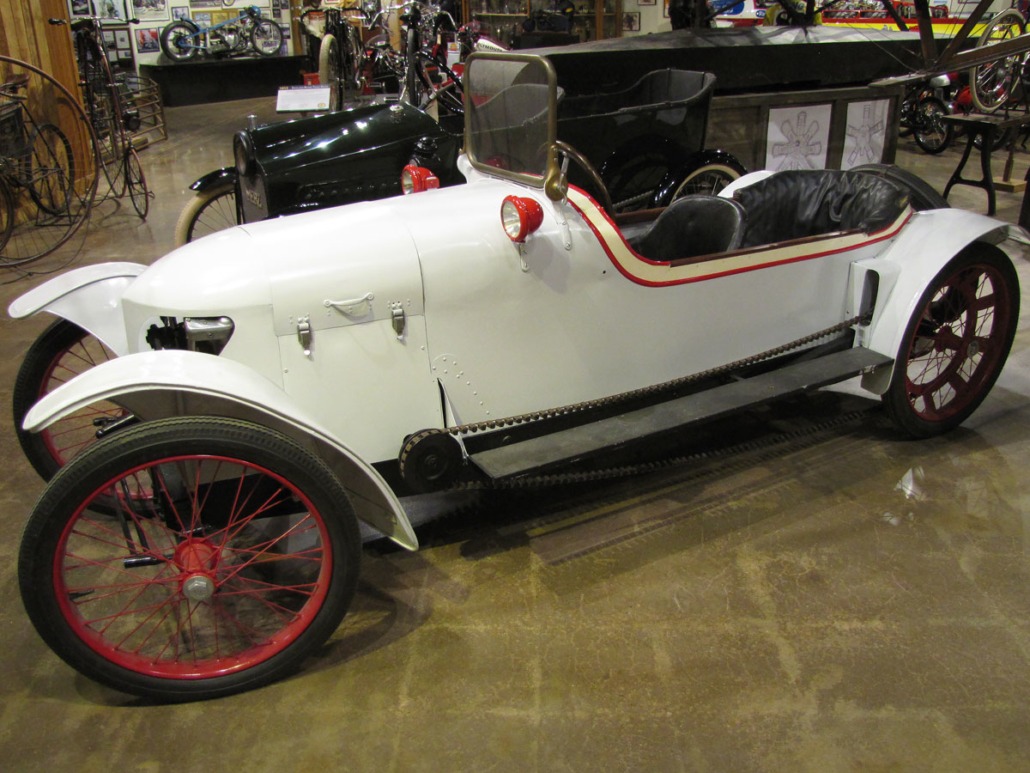 This week we veer away from motorcycles to Cycle Cars. The new Early American Transportation INNOVATION exhibition includes Cycle Cars as they were part of the transportation landscape in the early 20th Century, and used motorcycle engines for power. The STECO Cycle car, developed by James Stephens sits alongside the Merz in the new exhibition. CLICK HERE TO VISIT THE EARLY AMERICAN TRANSPORTATION INNOVATION PAGE.

Cycle cars were an innovative compromise between a true automobile and a motorcycle and often used motorcycle engines. Small, simple and light weight, one or two passengers were seated, sometimes tandem.  As with his Aerohydroplane, James Stephens designed a unique cycle car, and wanted his own engine. Working with inventor Parry Mack, and Mack’s original Mack motorcycle engine, they began to develop a new engine with Mack top end parts. New, the entire lower crankcase on the Stephens engine became an “oil tank” and an oil pump draws from the sump and supplies oil to bearings. Another change from Mack’s motorcycle application for the engine, an Atwater Kent Uni-Sparker (coil box) with a 6 volt battery wired to the “F” type distributor provided ignition.

While simple belt drive from the engine was sometimes used on Cycle cars, the STECO Cycle Car and the Merz employed a more sophisticated variable speed friction drive. A steel platen attached to the engine output shaft drives a friction wheel sliding left to right on a jackshaft. Via an outboard pulley on each end of the shaft, power is transferred to the rear wheels via long link belts. The location of the driven rubber tired wheel on the platen, near the center, or near the outer edge, offers infinitely variable drive ratios, even reverse. This system was also employed on machine shop drill presses early in the 20th Century.

Chassis rails are shaped from ash and the steel body is suspended by Parnacott Cross Springs at the front, Lanchester-type cantilever rear springs mount the rear axle. Nearly all chassis components were designed specially for the car and casting patterns and blueprints are displayed in the showcase in this exhibition.

The STECO Cycle Car and STECO Aerohydroplane and their archives were donated to the National Motorcycle Museum by the Minnesota Air & Space Museum in 2016.

*It appears Stephens had a running prototype, possibly this car, in 1912 and 1913, but the January 29, 1914 THE AUTOMOBILE magazine reported on the completed STECO Cycle Car first being displayed at cycle car show. Journalists commented that it was very well appointed with fine mahogany trim, leather upholstery and nickel plating, selling then for $450. Most of the parts to build five cars were produced, but only one car was completed, another partially completed. World War I brought a halt to work on the car and aerohydroplane which both went into storage until about 1990.