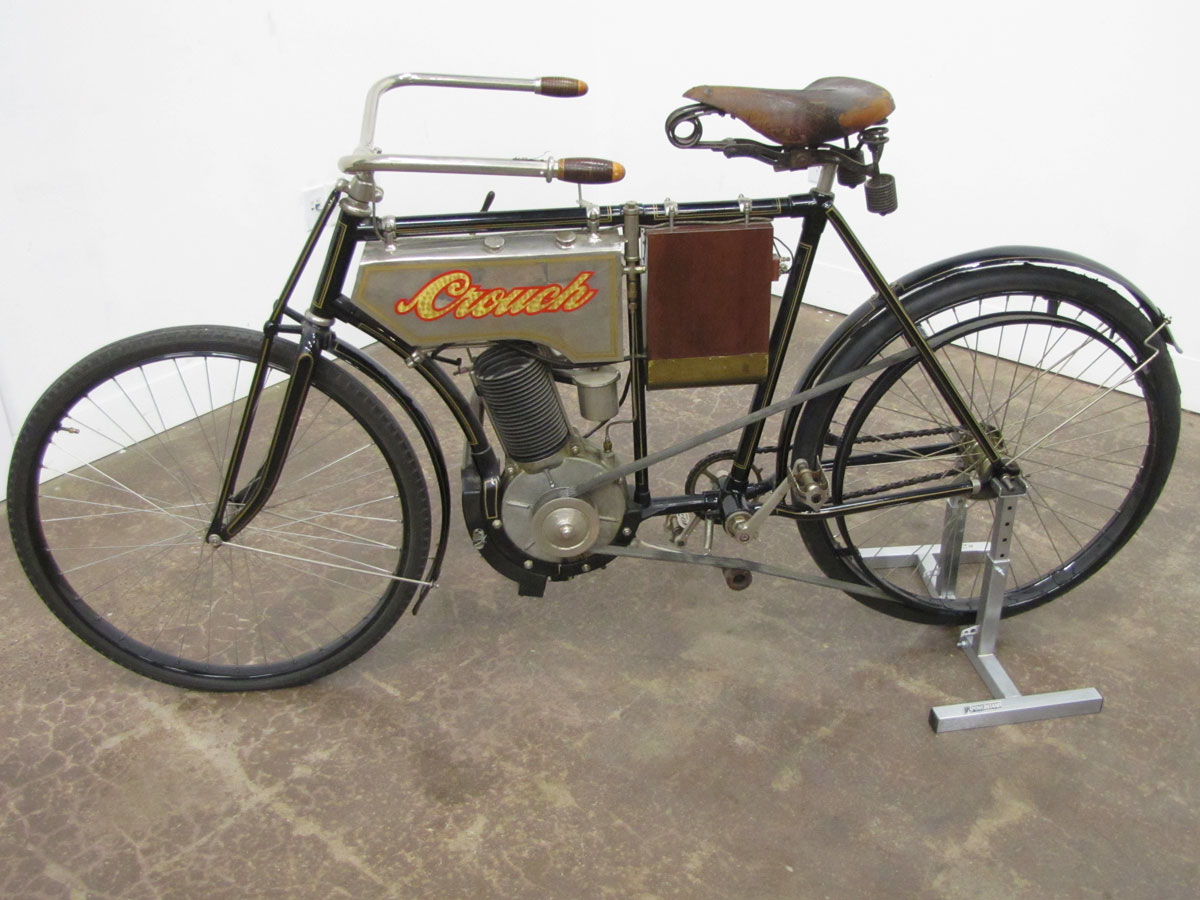 This Crouch was sold at the Steve McQueen auction at the Imperial Palace, Las Vegas in 1984. It is thought to be the oldest American motorcycle in McQueen’s rather large collection.

The diamond style bicycle frame was pretty much figured out by about 1890. Structural and easy to assemble to various sizes, it served well. But when the need for motor power came along, the V opening  between the down tube and seat tube was a bit tight. Indian retained the straight down tube and mounted their engine between the seat tube and pedal crank, which placed their engine, and the motorcycle’s center of gravity, rather high. Though they didn’t invent it, Harley-Davidson adopted a “loop frame” which allowed their single cylinder engine to sit lower, more to the front. Crouch made special castings which placed the engine even lower and offered well designed engine mounts.

And so Crouch, based in Stoneham, Massachusetts entered the burgeoning motorcycling manufacturing and assembling industry already strong in several industrial cities in northern America. Not a lot set them apart from other makers. This 1906 machine offers no suspension other than the sprung seat. The tank is split into fuel and lubricating oil cavities, with an oil pump attached at the rear. The belt drive uses a simple tensioner and there’s a coaster brake. At that time, most engines were single cylinder, simple inlet over exhaust design.

“The Crouch machine has earned a good reputation for itself by its performances in the past year,” according to The Motorcycle Illustrated, April, 1908. Crouch, to differentiate themselves claimed up to 150 miles…without breakdown. The company slogan was “The Most Satisfying Motorcycle Ever Built.”

The Crouch motorcycle brand was active between 1903 and 1909 and was among at least 250 other motorcycle manufacturers and assemblers. The stock market crash and resulting Depression caused most to fold leaving Excelsior, Indian and Harley-Davidson, with Excelsior also gone by 1931.

The Crouch is one of many very early motorcycles at the National Motorcycle Museum, and will be featured in the upcoming exhibit, Early Transportation Innovation alongside the Gnome Omega-powered 1911 Steco Aerohydroplane.