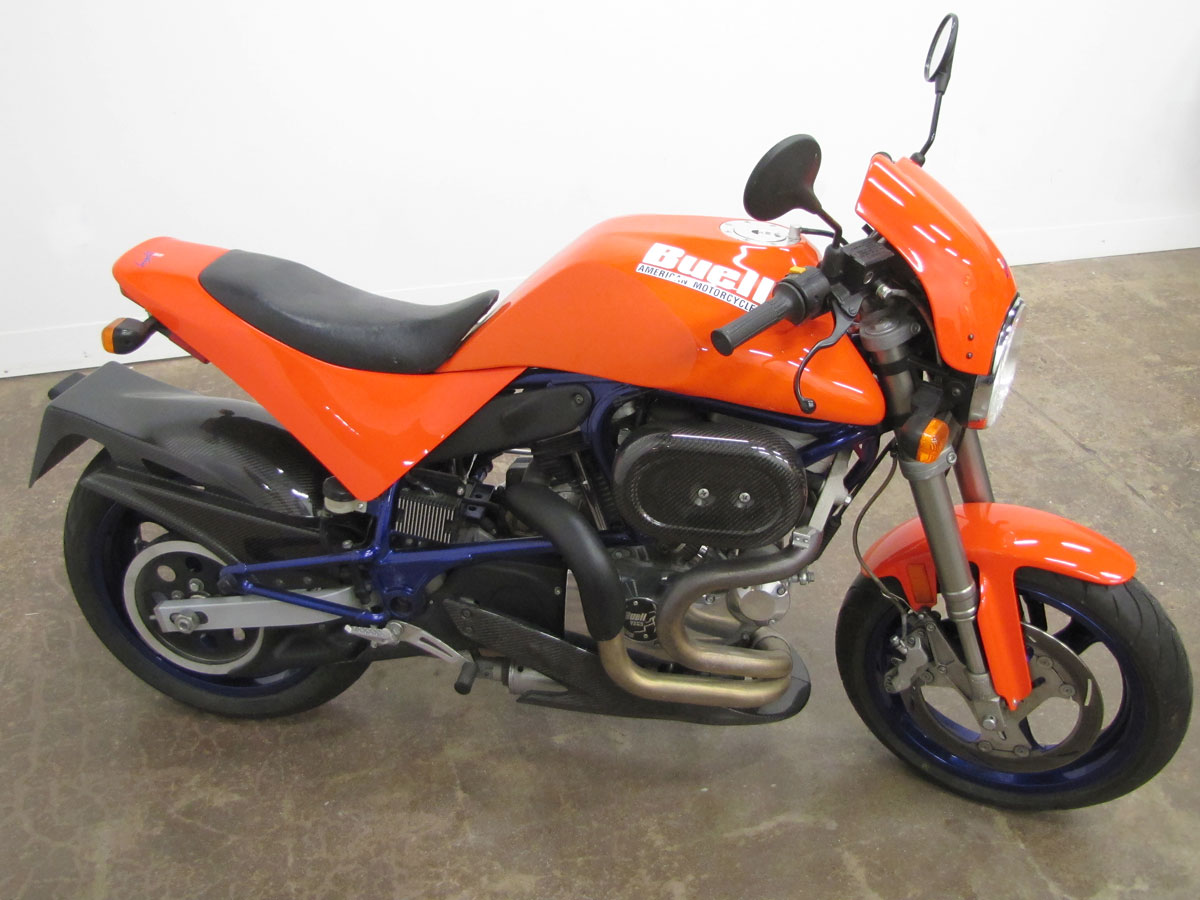 This 1998 Buell S1 White Lightning is in the rare and dramatic orange body/blue frame color combination.  One of the coolest Buells made, this bike was originally a promotional bike loaned to Country Music singer Alan Jackson. With a total of three years of production, about 2200 S1 White Lightnings were built in 1998. They used the Thunderstorm cylinder heads delivering about 10 extra horsepower.

While Buell motorcycles themselves are interesting, motorcycle entrepreneur Erik Buell’s personal story is truly captivating. In an era when the Japanese makers had massive sales, and their design and engineering teams had the ability to invent about anything motorcycle inexpensively and rapidly, Erik Buell chose to go his own way and ultimately invent his own motorcycle brand around his designs. Buell was born in 1950 and by 1979 had earned a degree in Engineering. His favorite form of motorcycling was road racing, which he pursued in his twenties while in school. While not studying or racing, like many of us, he worked at a bike shop. But his degree, and great persistence, landed Buell a job at Harley-Davidson Motor Company right out of school in 1979. There he was part of the Nova V-Four project and worked on the new FX series chassis design. Always the road racer, while not at the Motor Company, he continued racing, then acquired the Barton two-stroke square four 750 road racer from its British maker; drawings, patterns, parts and the rights to build Bartons. He hoped Harley-Davidson would embrace the Barton’s development as well. But when this path was shunned, Buell left the Motor Company in about 1983 to create the RW (Road Warrior) 750 around the Barton design and established Buell Motor Company. AMA rule changes obsoleted the RW750 shortly and his hopes to sell and support a production road racer, along the lines of Yamaha’s late TZ750, were dashed.

Going to Harley-Davidson for a power-plant, Buell next innovated the fully enclosed RR1000 Battle Twin which used Harley’s newly created XR1000 engine. Things began to happen for Buell when he developed the RS1200 using the new Evolution 1200 Sportster engine, but unit sales were still around 100 per year. In the RS design was a rear suspension system he would use for awhile; a coil-over shock mounted under the engine was in pull instead of compression mode to manage movement of the swing-arm. Harley-Davidson needed sportier new designs and around 1990 then CEO Vaughn Beals was convinced to bring Buell Motorcycle Company in house with a 51% purchase of Erik’s company. Over 136,000 Buell’s were produced by late 2009 when Harley-Davidson discontinued the brand. Erik Buell racing continued innovation and production but by 2015 closed its doors and soon went into liquidation; some new Buells are still available.

This Buell is one of several of Erik Buell’s creations currently on display at the National Motorcycle Museum, some stock, some in road race trim.