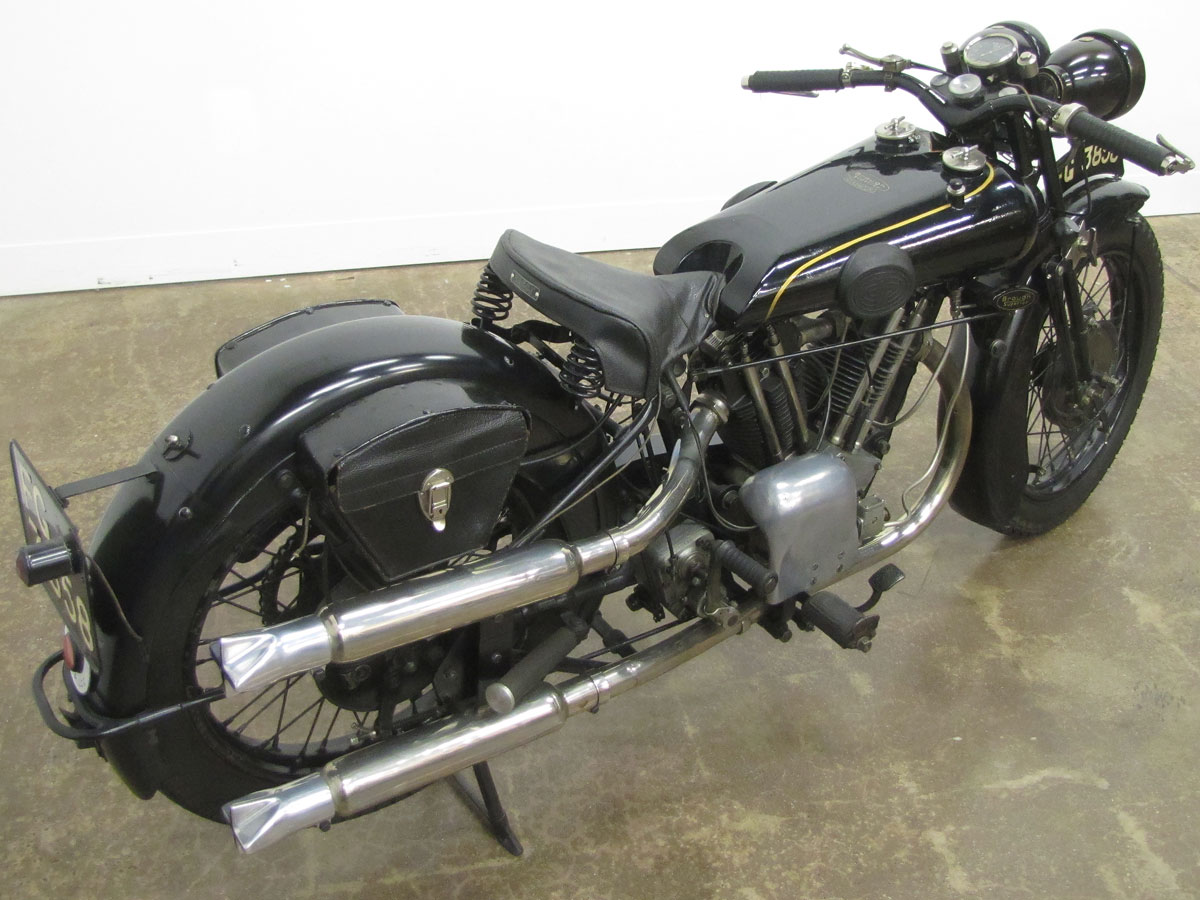 Brough motorcycles were described in period literature, and advertising, as the “Rolls Royce of Motorcycles.” Big, touring quality motorcycles with large, by British standards, v-twin engines and nice details like the nickel-plated fuel tanks and leather tool kits, Broughs were at the top of British two-wheeled designs. George Brough, pronounced “bruff,” was a flamboyant designer and racer who personally certified every motorcycle built in his Nottingham, England factory. As Brough was not an engine maker, J. A. Prestwich, J.A.P., supplied the overhead valve engine for this model and other British makes.
Though not as desirable as the larger, faster SS100, the 680 still shared Brough “genes” and was made from 1926 to 1936. In 1928 when this bike was made, only 155 of all Brough models were made; rarity is still a reason Broughs are sought after and command high prices. And even today we recall some of George Brough’s wealthy celebrity customers; T.E. Lawrence, a.k.a. Lawrence of Arabia and George Bernard Shaw, the composer, equally flamboyant men.
Around 1920, George Brough had left his father’s company, Brough, founded in 1909, to start his own adding the word Superior. Brough Superior built motorcycles, sidecars and a few cars from 1920 to 1940 switching to manufacture of aircraft parts shortly after the start of World War II. Bold to have used the term Superior in the motorcycles’ names, the reputation was born out on the road. Brough’s machines were superbly styled and beautifully made and had performance to match. The often made-to-order Brough Superior was desirable, especially when you added in the list of celebrities who owned one.
When you visit the National Motorcycle Museum you can get up close to about four Broughs including an SS100 Pendine racing model, similar to the 110mph machine used to set a land speed record on Pendine Sands in England. Elevated on a platform in the Best of the Best gallery, you can really take in its fine detail. Other Brough’s are on display near a group of Vincents and a BSA Y-13, the relatively rare BSA V-Twin.
Specifications:
PreviousNext
1234567891011121314151617181920212223242526272829303132333435363738394041424344454647484950
5 replies