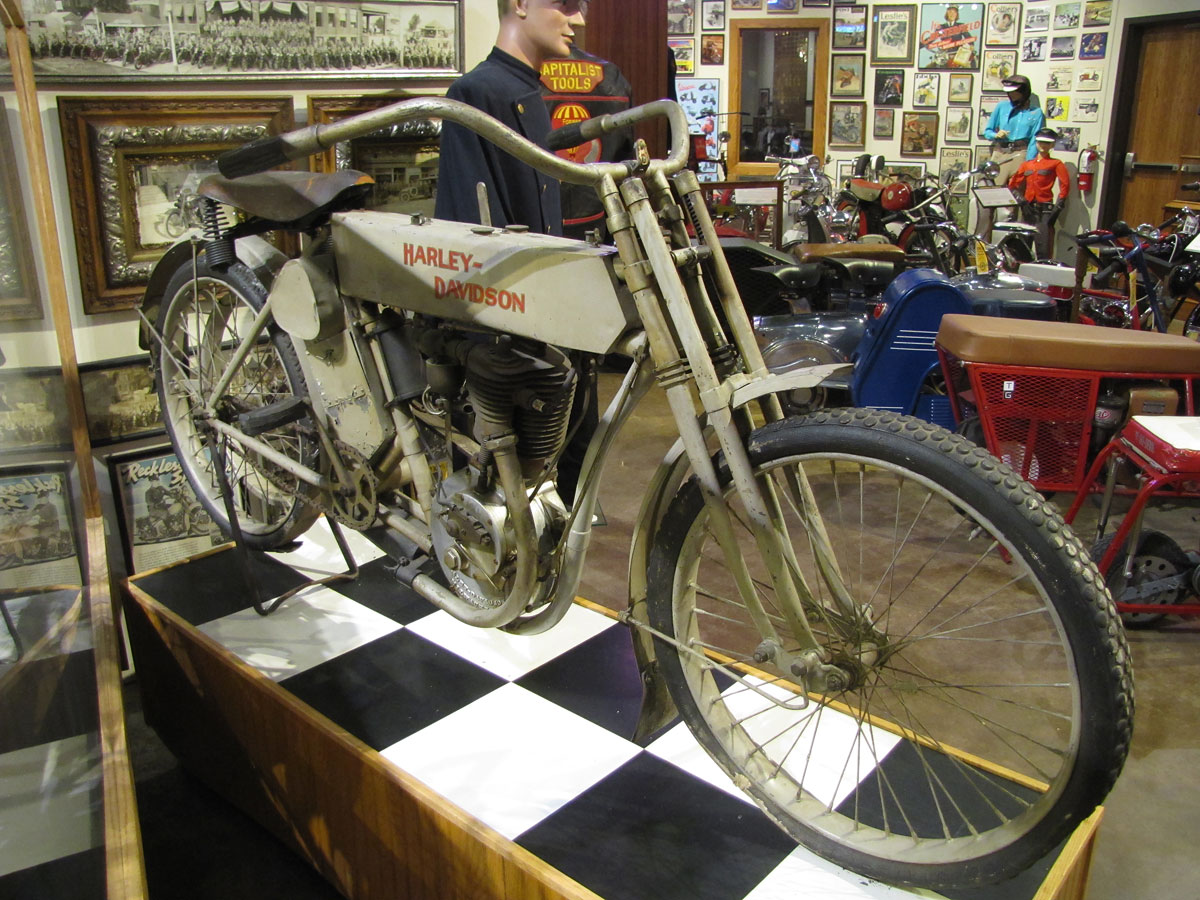 Five years into real production, about 1200 Harley-Davidson singles were produced in 1909. Most were battery equipped for coil and points ignition rather than using a magneto. A year of modernization, 1909 is when controls for the throttle and spark advance became cables routed through the handlebar rather than bellcrank-type linkage used until that time.
After 1908 the “strap tank” arrangement was discontinued and the 1909 frame offered attachment points for left and right tank halves holding fuel and lubricating oil. Note the exhaust cutout that was marketed as “for use out in the country,” not in the city.
1909 Harley-Davidson production offered four 30-cubic inch single-cylinder machines labeled Model 5, 5-A, 5-B, and 5-C. The main difference appears to be wheel diameter and ignition system. 5 and 5-A had 28-inch wheels, 5-B and 5-C, 26-inch wheels, and battery and magneto ignition respectively. Bigger wheels navigated rough roads better and offered a bit more ground clearance. 1909 is also the year that Harley’s V-Twin debuted but technical problems stopped production after about 27 machines were made.
Harley-Davidson lore says that the first police model was delivered in 1908 to the Detroit, Michigan Police Department launching more than 100 years of American police officers riding Harleys. The first official motorcycle patrol waited until 1911 when Chief August Vollmer set one up in Berkeley, California. As with the military, the police needed the high maneuverability of a motorcycle in a reliable package. At peak, over 3,400 police departments used Harleys in 45 countries around the world.
As you may know the National Motorcycle Museum has about 80 Harley-Davidsons, stock, custom, competition, on display. For example on display right next to this 1909 police bike is a 1908 “strap tank” Harley. So it’s fun to trace Harley-Davidson design history, all the makes and models through the years and also compare these bikes to those from Indian, Thor, Reading Standard and other makers also on display.
Specifications: