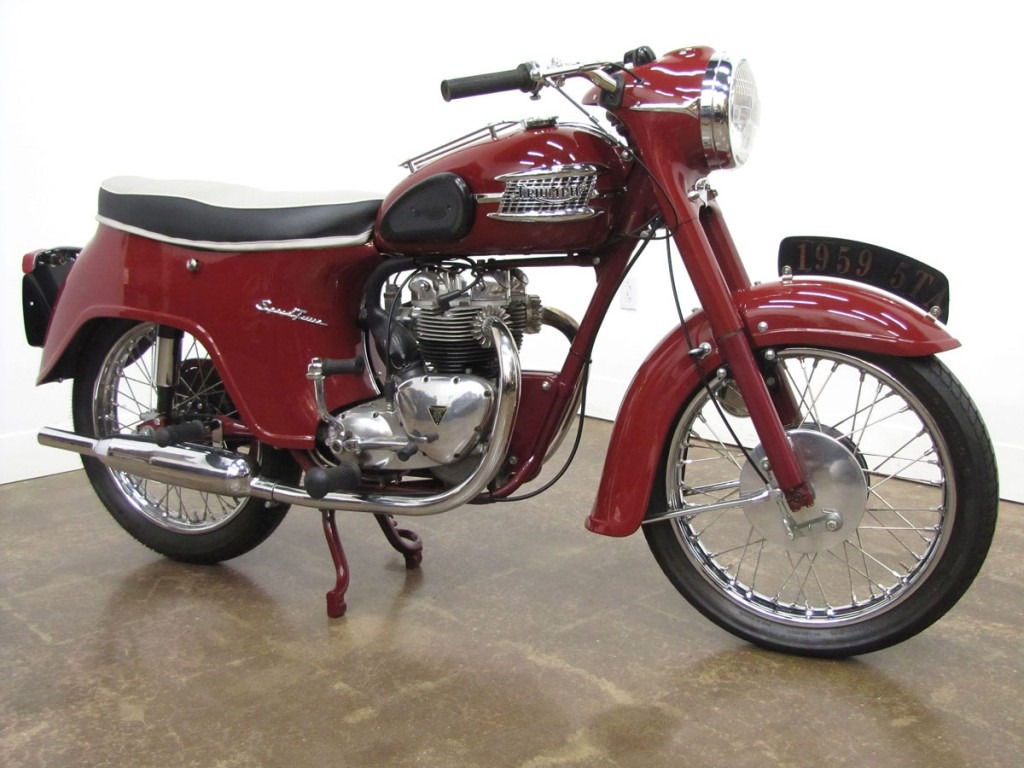 Brand new in 1959, the Triumph 5TA Speed Twin was Triumph’s first “unit construction” 500cc design. Like the 350cc 3TA which preceded it by one year, the engine and transmission shared a common case. The new model also shared its little brother’s bulbous and heavy steel bodywork, designed for rainy Britain; it was often removed and discarded by American customers.

The 5TA served as the basis for dirt track and road racing machines where its high-revving “oversquare” bore and stroke made it an immediate success. Some would argue the 500cc bike ran at a decided handicap; AMA rules for Class C racing limited overhead valve motors to 500ccs, where the Harley-Davidson purpose built KR750 and the Indian Scout ran 750ccs as they were flathead designs. Numerous road race and dirt track AMA pros made their marks with the 500cc Triumph.

The ancestor 1938 Speed Twin was the brilliant work of Edward Turner who came to Triumph from Ariel about 1936. Both the styling of the original motorcycle and its general mechanical design are Turner’s and were revolutionary and lasting; modern Triumphs still reflect the styling down to the primary cover, the fuel tank and mufflers. As we look back, the Speed Twin’s trademark Amaranth Red with hand painted pinstripes on the chrome plated tank look so right.
The unit 500 engine continued development in the Tiger 100 and Trophy 500 model ranges that were offered through 1973. Triumph ceased manufacture of the 500cc twins to concentrate on its 750 twins and triples, while AMA racing classes leaned toward the full 750cc formula regardless of number of cylinders.

There are numerous stock, custom and racing Triumphs on display at the National Motorcycle Museum. Other fine examples are the original 1938 Speed Twin and the 1959 Triumph Thunderbird constructed by Bud Ekins and customized by Von Dutch. In a totally different direction is the late Dave Mungenast’s Triumph TR5T ISDE enduro bike on display in the DIRT RIDING USA exhibition area.