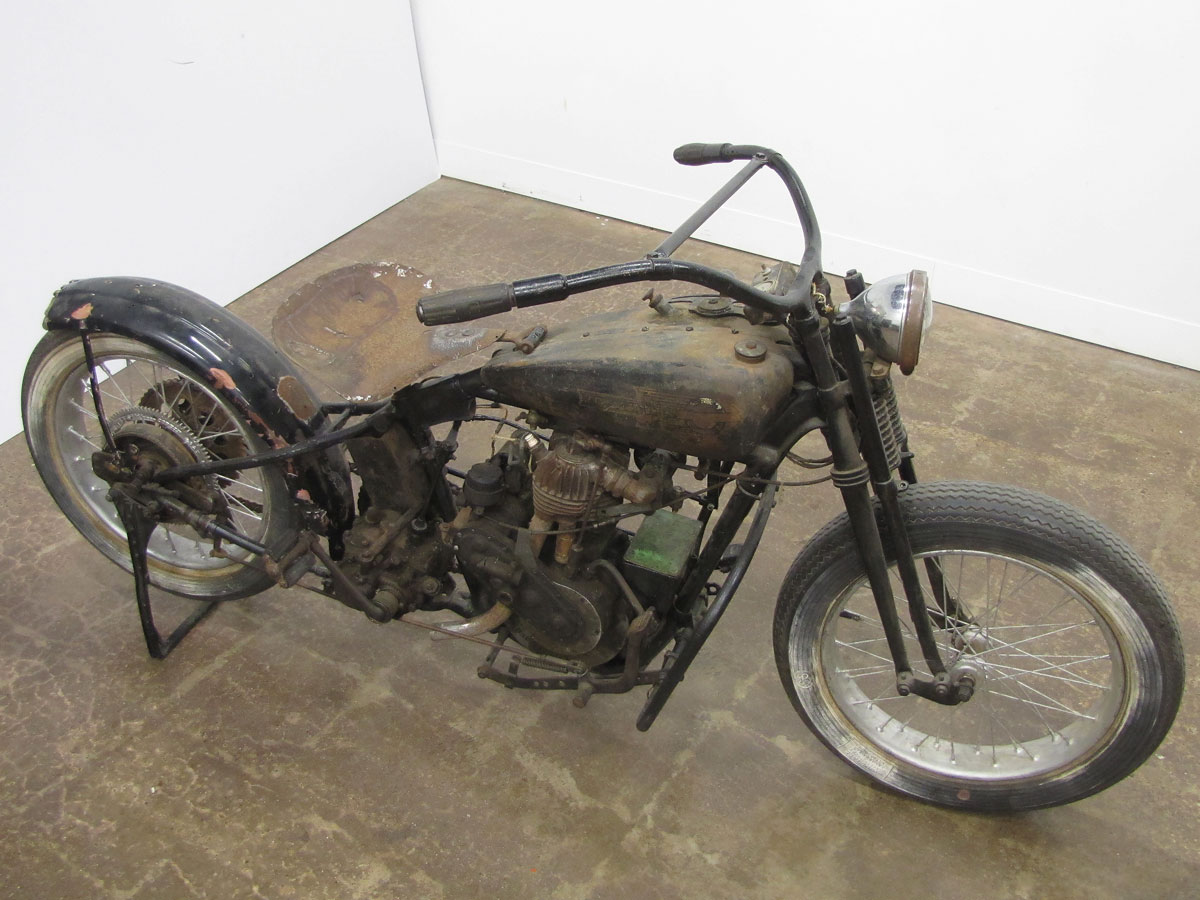 Stories are lost, paint fades, metal corrodes and old motorcycles pass into oblivion, or into a chicken coop. But sometimes this makes for an interesting story when years later, discovered, there’s a “barn find.”

A case in point is Charlie Gilmore’s recent “pick,” a 1927 Harley-Davidson JD, he literally found in a chicken coop. Charlie is a student of old American motorcycles, and has had some very fine and rare machines, some judged as Winners Circle quality by the AMCA. But he’s always in hunt mode, looking for something interesting. “I saw this old bike down the road for my home in western Iowa about 50 years ago, in the mid- to late 1970’s. It was with its second owner, and though rough, heavily modified and a big project, he did not want to sell it.”

For 50 years, Charlie did not give up. Over the years he stopped every so often to see if the bike was for sale. Then the owner died, and he asked again. Not yet. Next time, yes, he could buy it!

What really attracted Charlie was not that this bike had potential, it was that it had some very radical modifications that made him wonder, try and conclude what a previous owner was trying to do. “If you look at the thing, you see that the front cylinder is removed and the crankcase blocked off. Then he tilted the engine forward so the rear cylinder has become vertical. My best guess is he was trying to make the motor smaller in displacement to compete in a lower displacement class in hillclimbs. The rear frame tubes are bent, sort of swooped, maybe for weight transfer. Out here we used to have a lot of hillclimbs put on by the Ghost Chasers M/C and other clubs. Then to make the engine fit, he also removed the lower of the two top frame tubes and fabricated new engine mounts. Then the stock JD tank, with its neat cutouts, pockets for the valve gear, wouldn’t fit. I am pretty sure this is an Indian Princess tank put on in place of the JD tank, but I am still researching that. The rims are wide, maybe for hillclimb chains, maybe for better traction if he was doing any flat track racing. One person thinks they might be aircraft wheels they are so wide. Like many privateers in that era, maybe he rode the bike to the track, took off the lights, had his tools ready in that box now in the space where the front cylinder was, and went racing, hillclimbing, I figure.”

Charlie has a lot of questions about the bike, and even his many friends at the recent AMCA swap meet in Fremont, Nebraska couldn’t answer many. “I’m glad the kids on the farm just did little stuff to it like the aluminum paint on the rims…maybe they were thinking chrome…and the repainted tank. Pretty sure I got most of the pieces, but plan another trip back to the farm just in case I missed something.”

Will Charlie restore this JD to match the quality of several at the National Motorcycle Museum? “I wish more of the old hillclimb group in my area were still alive, they’d know more about it. In the 50 years I waited to acquire it, the men and their knowledge is gone forever. But I plan to get it running as is and use it at meets. I’d never restore it. There are a lot of questions, sure, like why one footboard and the braced handlebars, but it’s telling us more with all its modifications and oddities. It would be a shame to take them all away and just have another regular JD Harley!”

BARN FIND is one of two new exhibits at the National Motorcycle Museum being installed leading up to Vintage Rally on June 10th. Make sure you stop by and check out DIRT RIDING USA and BARN FIND featuring Charlie Gilmore’s modified JD.