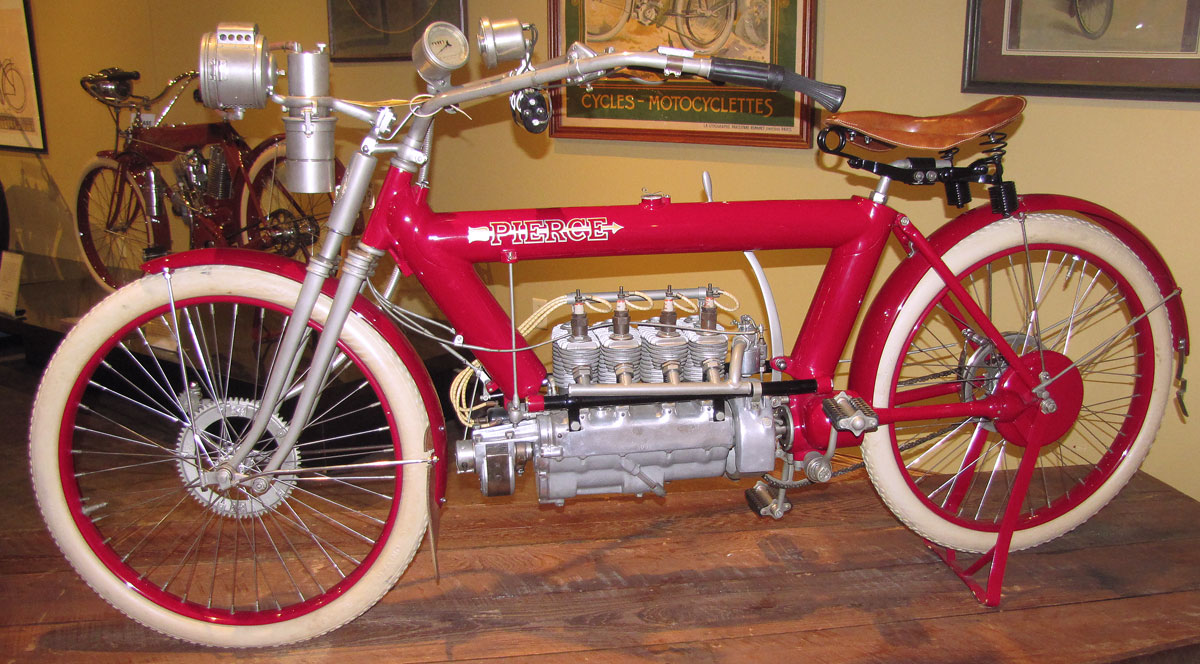 America’s first four cylinder motorcycle, an innovative and luxurious design from the son of the founder of one of America’s early, premier, automobile builders.
George Pierce began manufacturing during the Civil War – bathtubs, birdcages and ice boxes – forming George N. Pierce Company in 1878. High quality bicycles came next from the Buffalo, New York factory, soon followed by steam, then gasoline, powered automobiles in 1901. The car business expanded with the Pierce Great Arrow of 1904, then value-priced at $4,000. Four years later the Pierce-Arrow Motor Car Company was launched. At that time the Board of Directors ousted the Pierce family from the company. The brand lasted until 1938 as one of America’s finest and prestigious, a favorite of The White House and royalty from Europe to Hollywood.

Being left to take over the separate bicycle manufacturing company, George’s son Percy Pierce stayed at the Pierce Cycle Company factory. Likely inspired by the Belgian F-Head FN four cylinder machine, he built singles and America’s first 4-cylinder motorcycles from 1909 until bankruptcy in 1914. Though his machines had a high regard, unlike Henderson, Pierce failed to find a large enough market for these expensive, premier machines.

The Pierce Four expresses that it is top quality. Each component’s design re-thought and then hand-crafted in the factory. With few exceptions parts were not bought-in from a catalog as much of the competition was doing, becoming merely assemblers rather than manufacturers. Nickel plating is used extensively. Note the enclosed shaft drive to the rear wheel, the integrated fuel and oil tanks and 2-speed gearbox, uncommon in 1912. Unusual in America, Reading-Standard was the first with side-valve engines, Pierce second using a unique two-cam arrangement.

Pierce created only a few thousand motorcycles in the five plus years’ production and a century later few have survived. This machine belongs to Jeff Gilbert who has graciously loaned it to the Museum for display in the Hagerty Insurance Best of the Best Gallery. But after a six year stay, it’s on its way back to Jeff in the next few months.