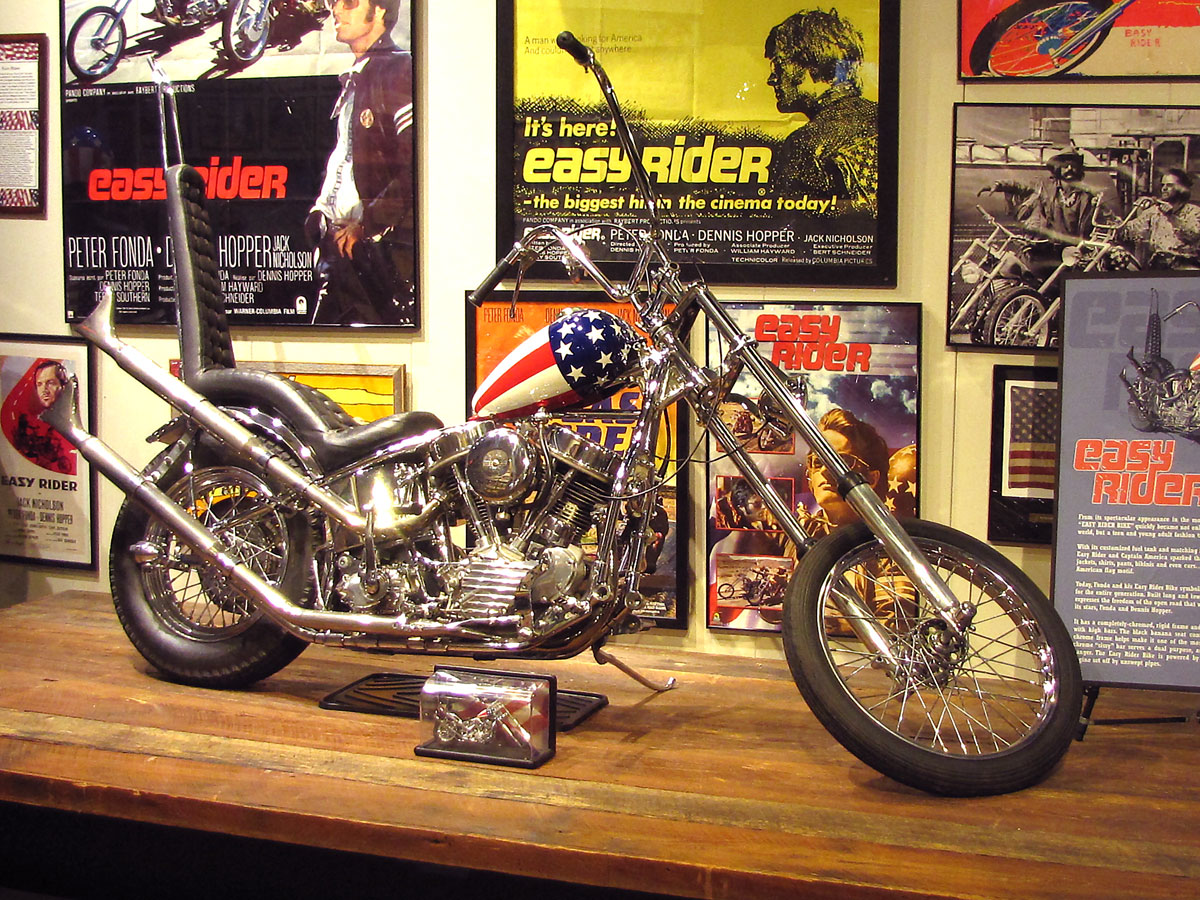 While the idea for the film Easy Rider  was created in the mind of Peter Fonda and Dennis Hopper to bring to the fore motorcycling, freedom and some underlying social problems in America, it did much more and remains an important independent film. Peter Fonda got the idea to make a modern “western” centered around two bikers traveling around America and eventually being shot while riding in the South. Fonda contacted his friend Dennis Hopper and together they made the idea into a movie they called The Loners. Hopper was directing, Fonda producing, but they both starred in the film and wrote it. There are two stories on where the film’s name came from; most likely bike builder Cliff Vaughs came up with it, or the film’s screenwriter, Terry Southern.

The chopper craze was well on its way by the late 1960’s but this film solidified and popularized the form internationally, and for a time the message the film and this motorcycle put forth. The high rise handlebar, “American Flag” peanut tank, “panhead” motor and “rigid” chrome frame, extended fork, skinny front tire, fat rear, plus the stepped seat and sissy bar became the right elements of the chopper in this era, though some preferred an extended girder or springer fork.
The bike pictured is a very good replica of one of two matching bikes, props made for the 1969 cult classic motion picture. Peter Fonda, playing Wyatt, rode the bike dubbed Captain America. In the course of filming the final scene, one of the two Captain America bikes is crashed as Fonda is shot while riding it. The crashed bike, now restored, is the only Captain America bike known to exist and currently lives in California. Fonda designed the bikes then commissioned them from highly experienced builders Cliff Vaughs, a film maker in his own right who very recently passed away, and Ben Hardy.

This Captain America tribute bike, and a Billy Bike replica, plus Easy Rider movie posters are all on display at the National Motorcycle Museum.

On Loan to the National Motorcycle Museum

How Many Survive?The VanBuren Sisters and the Indian Powerplus Scroll to top