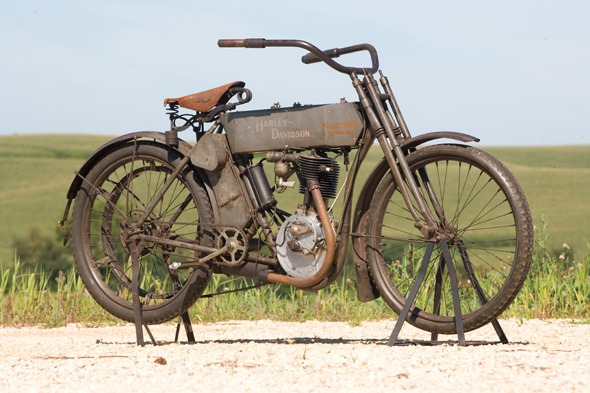 At the dawn of the last century, Harley-Davidson recognized that its rugged and reliable motorcycles were perfectly positioned to service law enforcement. Back then, good mobility was vital, and a single-cylinder Harley-Davidson provided that at a time when our country was just beginning to make the transition from the horse and carriage to motorized transportation. Easy to operate, economical to use, and a form of transportation that allowed widespread access to remote areas that needed policing, the earliest Harleys fit the bill. The archives state that the first sale of a Harley to a municipality for police work occurred in 1908, and Detroit was the first customer. From that humble beginning, Harley has expanded its efforts and focused on the law enforcement market to great success. Today, in the United States, over 3,400 police departments ride Harley-Davidson motorcycles. Worldwide, Harleys are used in over 45 countries, to keep the peace.

The bike was sold to the La Crosse, Wisconsin, Police Department where it spent many years in service to the community. It passed through a few additional owners until it had outlived its usefulness and was then disassembled, put in boxes, and stored indoors for decades. It was then rediscovered,
reassembled, and donated to the La Crosse Historical Society. With no place to display it, the bike was then loaned to the local Harley-Davidson dealer who displayed it in a showcase for many years. Many people wanted to buy it, including John, but it was not for sale, and it remained on display for all the world to see. The La Crosse Historical Society was in need of cash to restore a local landmark building, so it decided to sell the machine to finance that restoration. A few collectors were aware it was on the market, but the price was steep due to its rarity and desirability. However, John was able to step up and become its next caretaker.

If you look the bike over carefully, you can see how well-preserved the machine really is. Complete down to its core, this motorcycle wears all its factory parts; its tall stance and proud heritage speak volumes about its journey through time. The paint, although worn, is all original and the La Crosse Wis PD designation resides in a small rectangular area outlined by factory pinstripes. The lettering was probably done by a local sign painter employed by the city. Wis of course stands for Wisconsin; this was long before the advent of the two-letter state designations we’ve all come to know and recognize.

The year 1909 was the first for the redesigned frame that incorporates a second top bar for added strength. The gas tank was also redesigned as a three-sided affair, a marked improvement over the 1908 frame and strap tank design. A metal toolbox first appeared that year, and beefier components like the front forks make the ride smoother and the chassis sturdier. The 28″ wheels put the rider up on a perch; and the 3.00″ clincher tires, though shaky by today’s standards, were state of the art back then. The handlebars have the cables running through them with the left grip used to retard and advance the spark and the right grip to control the throttle. This setup would last for decades. The single-cylinder motor has a bore of 3-15/16″, displaces 30″, and pumps out a claimed 4 hp! Power is transmitted to the rear wheel by a leather belt drive, and the clutch is activated and deactivated by the belt tightening handle on the left side of the bike. The rear brake is a coaster brake design, similar to what you probably had on your first bicycle. The bike retailed for $210, expensive by standards of the day, but well under what a car cost in the same period.

Harley also introduced its first V-twin in 1909, but that would disappear from the lineup the following year and return a few years later, remaining the heart and soul of a Harley-Davidson to this day.

Two colors were offered in 1909: Renault Gray with carmine striping and Piano Black. Together with their nickel-plated cylinders and assorted hardware, they were striking machines at the dawn of motor transportation.

There was great optimism during this period, and motorcycling in general was gaining favor. Production numbers continued to climb for all brands, and it was anyone’s guess as to who would dominate the two-wheeled trade in 1909. Indian was becoming a powerhouse back East, and other brands were entering the field on a regular basis. It was an exciting time in the business, punctuated by innovation and advancement.
In 2010, John was invited to display the 1909 police bike at the world-famous Pebble Beach Concours D’Elegance. The bike is on loan to the National Motorcycle Museum, John being the museum’s founder. So, anytime you’re in Anamosa, Iowa, stop by and view this amazing time capsule from the dawn of cycling. Thank you, John, for your continued stewardship of this great machine and for putting it on display for all to enjoy and appreciate. AIM
Words by Jim Babchak, photos by Pam Proctor
Story as printed in American Iron Magazine.