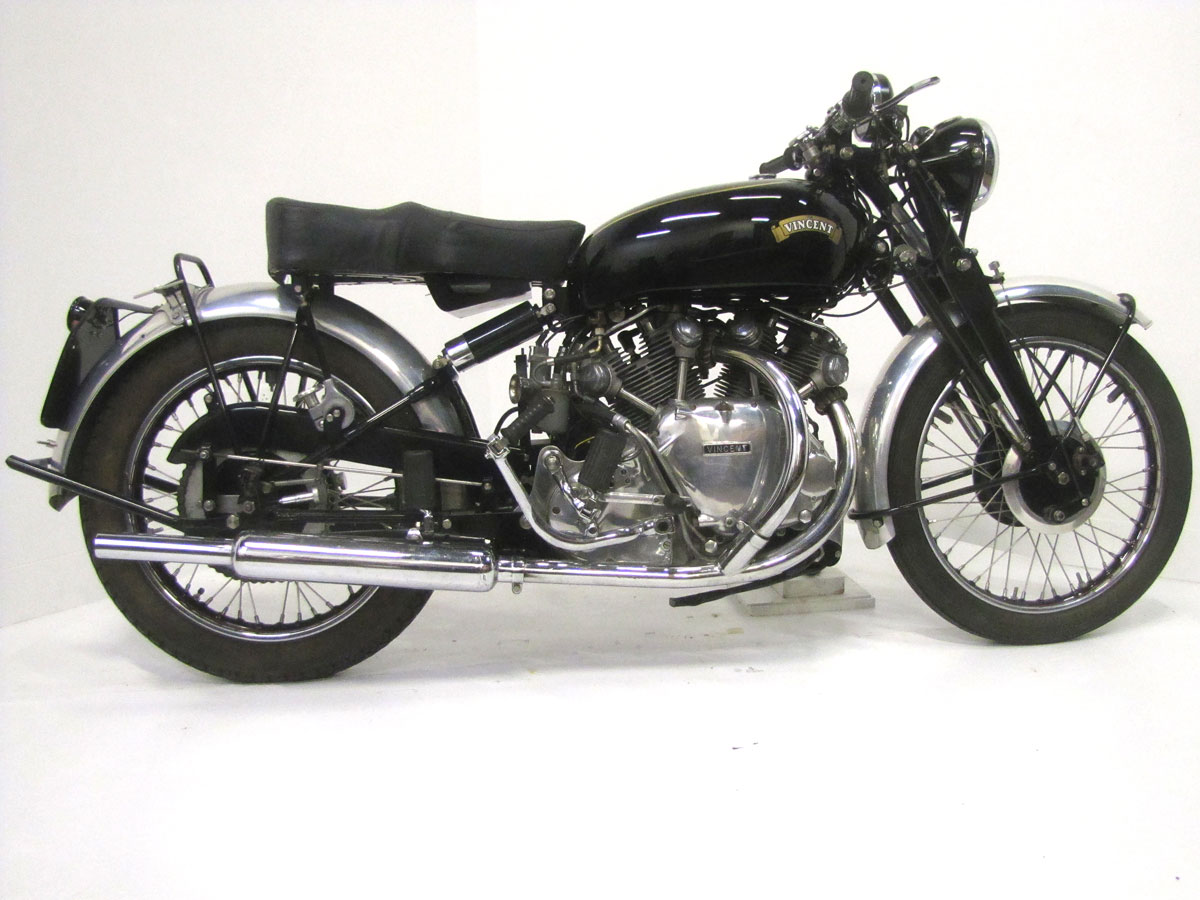 For the most part the big 1000cc Vincent V-Twins were Rapides or Black Shadows, two levels of trim and performance. The sport version, the Black Shadow uses a larger front wheel and polished alloy fenders. The Touring model uses 18 inch wheels and handsome skirted  “body color” fenders. A small number of each were painted Chinese Red, a red with a slight orange cast that really makes the bike stand out. In fact, some would say the red works better with the polished engine of the Rapide as opposed to the black engine of the Black Shadow. Our subject, being a black Rapide with polished fenders offers great contrast; black with chrome or polished aluminum always works.

Speaking of paint colors, in 1950, Vincent forged an agreement for the Indian Sales Corporation to be the American sales agent for Vincent. Being associated with DuPont, Indian was used to bright colors and thus requested something other than black. Vincent responded by hand spraying 107 machines, in three batches, in Chinese Red, although some also arrived in Egyptian Blue. But that color was not used in the model name.

The Vincent was equipped throughout with unique features. The very large for the time speedometer sits handsomely above the handlebar. Both axles were equipped with “Tommy bars” and fixed nuts allowing axles to be pulled with no tools. An interesting design approach, double “side stands” on some models allowed for elevating the front wheel. Later Series D models offered a center stand that was operated with a lever on the left side of the bike. And the rear wheel is reversible, a sprocket on each side of the hub to offer quick-change final-drive ratios; good if you wanted to gear down to pull a sidecar, for example. Full tool kits were supplied and lived under the seat in a handy pull out sheet metal drawer. Detailing the machine are a great number of cadmium plated steel nuts, bolts and screws which many restorers replaced with stainless steels pieces.

In general, Vincents, even the smaller 500cc Comets, which share a frame design with the twins, and “half” the twin engine, are a feast for a motorcyclist’s eyes. Detail on the forks, a complicated “Girdraulic” design by Vincent, is fantastic. And a thorough scan of the machine will tell you it lacks a true frame! The oil tank, a welded box mounts to the top of the engine, is hidden under the fuel tank, connects to the fork. The swingarm, of cantilever “mono-shock” design attaches to the rear of the engine and the oil tank. The only design feature that some find a bit odd is that with the exception of the last version made near the end of production, and the enclosed bikes, Princes and Knights, the seat travels up and down with the rear suspension. As such half the rider’s weight is added to the rear suspension unsprung weight of the rider/machine package.

Most agree that approximately 2,700 Series C Rapides were made between late 1948, or early 1949, and 1955, although for the first couple of years Series B production continued. The 1947 Series B Rapide was described as “the world’s fastest standard motorcycle” and could achieve a good 110 to 115 mph.  With the arrival of the Series C, the Black Shadow was quoted at 125 mph and the Black Lightning, a race-only batch of about 30 units, at 150 mph.  At 150 mph, Vincent could drop the word “standard” and simply say “the world’s fastest motorcycle.”

When you visit a motorcycle museum, there are a few bikes you expect to see. Maybe a Harley-Davidson Knucklehead, or  Kawasaki Z1, perhaps a Triumph Bonneville, or the small Honda you got your start on. But above all, you’ve got to see some Vincents, and the National Motorcycle Museum has about eight you can check out, stock and custom, even a drag racing Vincent, an LSR machine and the interesting Vincati built by Big Sid! This 1954 Vincent Rapide was one of John Parham’s favorites.