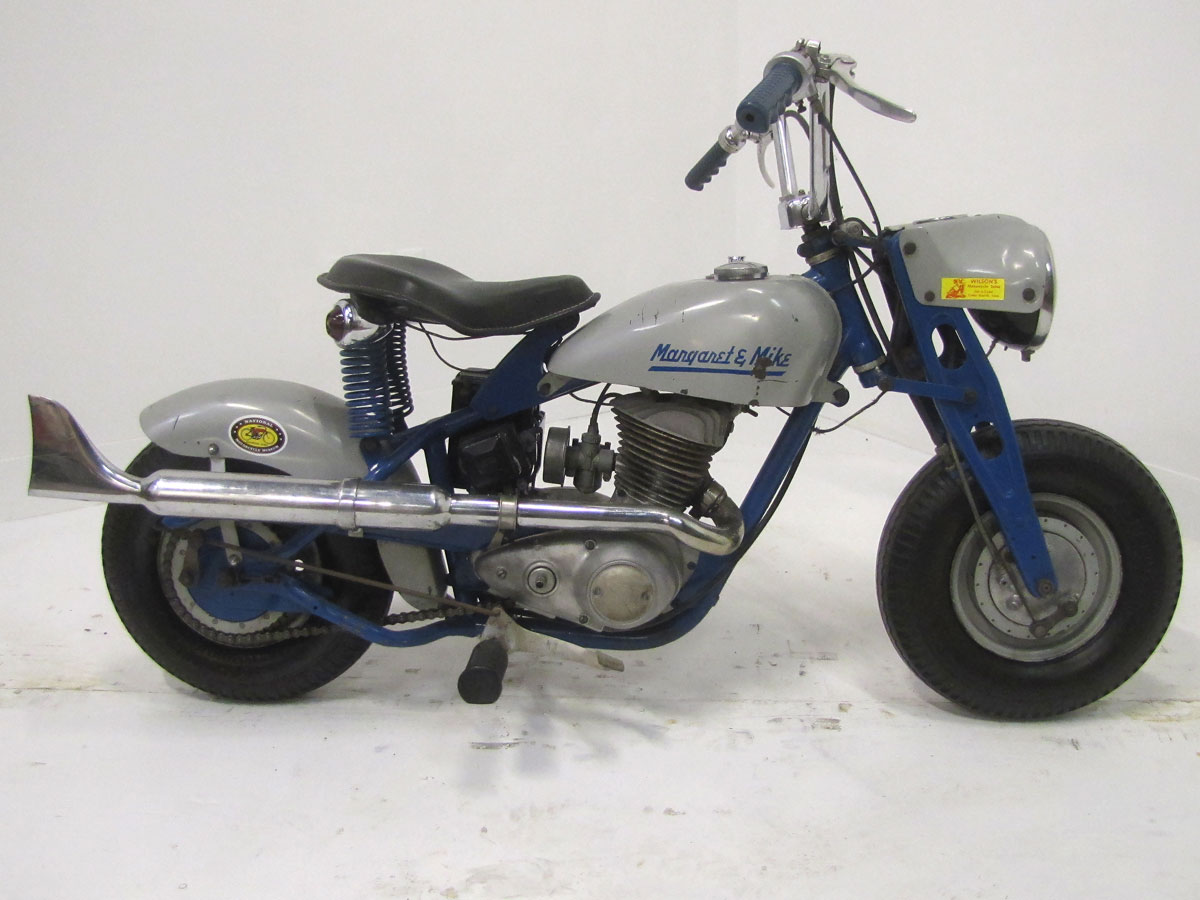 As you walk the exhibits at the National Motorcycle Museum you are viewing hushed motorcycles. But many have great stories to tell, if only they could speak. Think of the crowds watching the orange 1911 Flying Merkel dirt track bike, lapping the Dodge City 300; the roar, exhaust fumes, plumes of dust. Think of the STECO Aerohydroplane in test flights on Lake Michigan. The look on the kid’s face when he first rode the Doodle Bug scooter on display.

Over in the Women and Motorcycling section is a silent gray and blue motorcycle, very small in scale, like its rider, Margaret Wilson of Cedar Rapids, Iowa. Mike Wilson, Margaret’s husband of over 70 years, about halfway through their lives together, took a Harley-Davidson S-125, aka Hummer, and in the parlance of hot rodders, sectioned it, just about everywhere. He made the Hummer closer to the ground and shorter in length. But being a very sophisticated and experienced aircraft mechanic, fabricator, racer and race tuner, the fabrication work looks very factory. And of course the color scheme is Motor Maids, a women’s organization formed in 1940 with which Mike and Margaret were very closely involved. 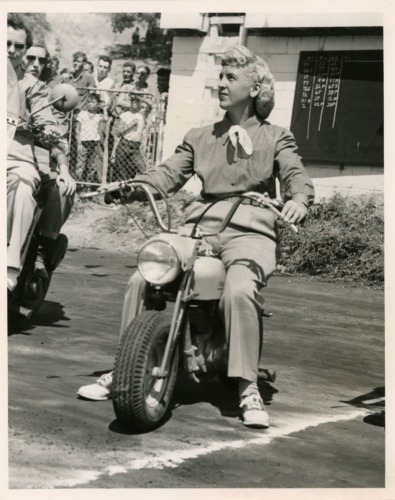 Motor Maid Margaret Wilson on this bike at the Peoria Raceway in 1953.

We lost Mike and Margaret, both in their 90’s, a few years back so we don’t know what really happened with this bike. They were such a fun and close couple, my hunch is Mike built the bike without Margaret’s knowledge, then surprised her with it. Imagine the look on her face! She was a very accomplished rider; she and Mike rode Harley big twins, FXs and Sportsters in every state in the union, or you might see her driving her red Pontiac Firebird.

So what bike did Mike start with? The basic machine was a 1950 S-125, but Mike sectioned the frame and fork. The front brake is the Harley S-125 mated to an eight inch utility wheel mounted with tube-type tires. The rear wheel, brake and sprocket were handled similarly. Note how Mike bowed the frame tube to clear the drive chain. The tank is S-125, seat from this era. The girder fork S-125, pre-hydraulic fork of 1951, headlight nacelle, same and light switch in the top of the fuel tank. Handlebar controls, Harley-Davidson. Note both the shifter and kicker are on the left part of the original DKW design.

By the mid-1930’s lightweight singles had vanished from Harley’s line-up. After World War II, with the War Reparations Act, Harley, and BSA,  gained access to the German manufacturer, DKW’s design for a 125cc lightweight, two-stroke machine. Foretelling the future, the design included a hand clutch and left foot shift.

The S-125 arrived in dealerships in 1948 just a few years after World War II had ended, was promoted as getting 90 miles per gallon.  It served to entice young riders onto a real Harley, though it never became very popular. Later versions were in 165cc and 175cc variants, some like the Scat served as off-road, even lightweight dirt track racing machines. Technically the name Hummer was given only to the 125cc machines a few years after introduction. The term now includes most of these 1940’s and 1950’s two-stroke machines.

So make sure you check out Mike Wilson’s custom work next time you visit the National Motorcycle Museum. The history of the Motor Maids is explained there, as well as that of the Women on Wheels and several accomplished female riders. 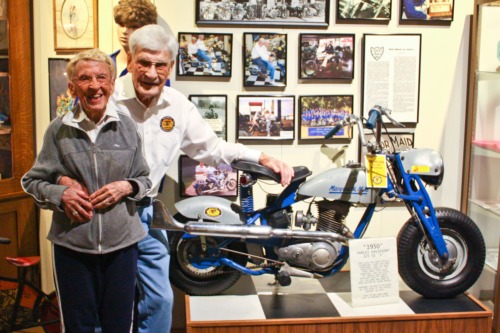 Mike and Margaret Wilson on their 70th Wedding Anniversary at the Museum.