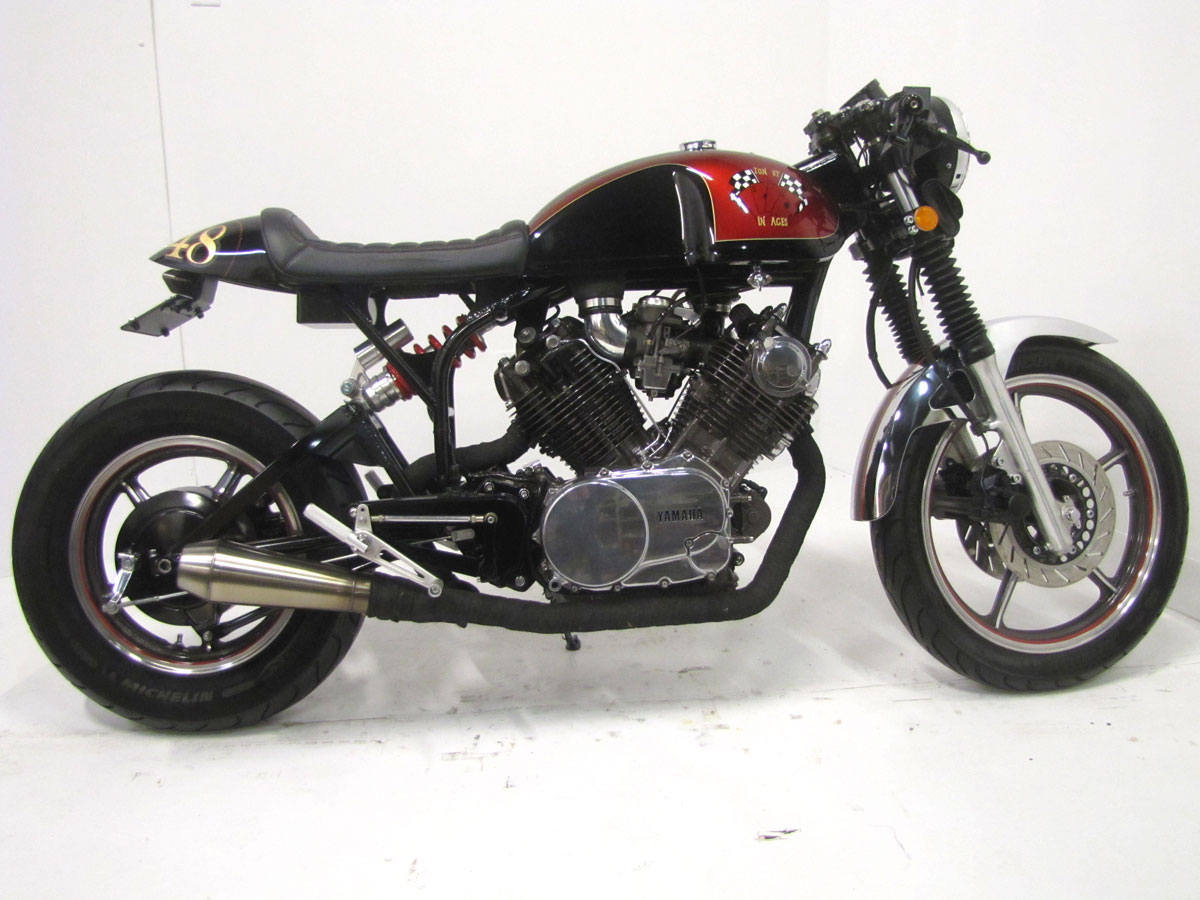 A few years ago, the National Motorcycle Museum installed a Cafe Racer exhibit. Some machines on display are “production” cafe racers, others well crafted customs, like this week’s featured bike. 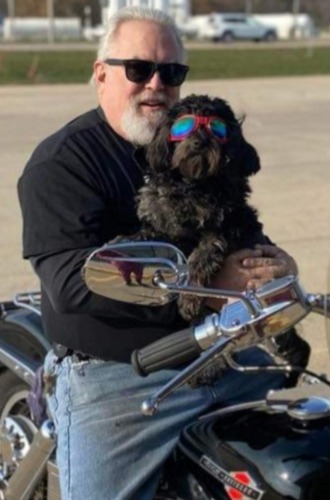 Retired racer, long time race team tuner and machinist, inspired by Doc’s Chops’ Yamaha Virago, Ron Bevard set to work. He knew of an intact though troubled stock XV920 Virago in the neighborhood, bought it. As you can see in the construction photos not much of the stock bike survived. ”They were not so good looking,” offers Bevard. Two inch steel tubing, .115 wall thickness, and a Square D tubing bender got him started, and his son did final TIG welding. A Yamaha R6 shock unit fit the distance well, and turned out decent with valving and spring rate. A tiny, but expensive, Anti Gravity battery hides under the seat, wiring is by Ron. Front end is stock, wheels are Yamaha, but bars, controls, seat deck and other bits are from eBay listings, speedo from Dime City Cycles. Since XV920s show up on road race circuits, the aftermarket provides a good pipe. Like the Doc’s bike, tank is from an ancient Benelli Mohave, and Ron’s painter, Ben Harrington, was inspired by its shape; look closely at this painter’s detail work. Outlined real gold leaf shows off Ron’s old racing number. He references the Ace Cafe and the Ton Up status of exceeding 100 mph, on the British roadways, between certain taverns. Ron is a huge fan of Isle of Man road racing. Why didn’t Yamaha think of this bike?

But a bit about the basic stock Virago Ron started with. Racking our brains, can we think of any V-Twin powered bikes from Japan before 1980 or so? Well, there were the Marushos and Lilacs, yes, but the motor was in the frame ala Moto Guzzi.  In spite of America being a huge market for Honda, Yamaha, Kawasaki and Suzuki, they were slow to adopt one of America’s favorite power plant layouts. But when they did, it seems Yamaha was first, and the result was unconventional; shaft drive, engine as stressed member, single shock rear suspension.

Available in 750 and 920 versions, the Virago came into a world full of in-line four cylinder bikes, the UJM that American riders loved, and still do. Fours offered big power, great sound through an aftermarket four-into-one pipe. The Viragos were in a mild state of tune. For the cruiser niche the 75 degree twin made good sound and offered power pulses similar to those from an American twin, somewhat like a Sportster, but in the end lacking.

Ignored for decades, many fading into salvage yards, lately the 920’s have proven to be an amazing canvas for custom builders, especially those stripping off fenders, adding custom tanks, big tires and decked seats; the Cafe Racer clan is doing amazing work with them. The bold wide angle V-Twin motor hangs free from the spine frame, shaft drive enclosure is sleek, the cantilevered seat frame and sloping, tucked in mono-shock all conspire to make a machine that visually is mostly handsome SOHC motor.

When you visit the National Motorcycle Museum you can check out this interesting cafe racer built by Ron Bevard and over 550 other machines.