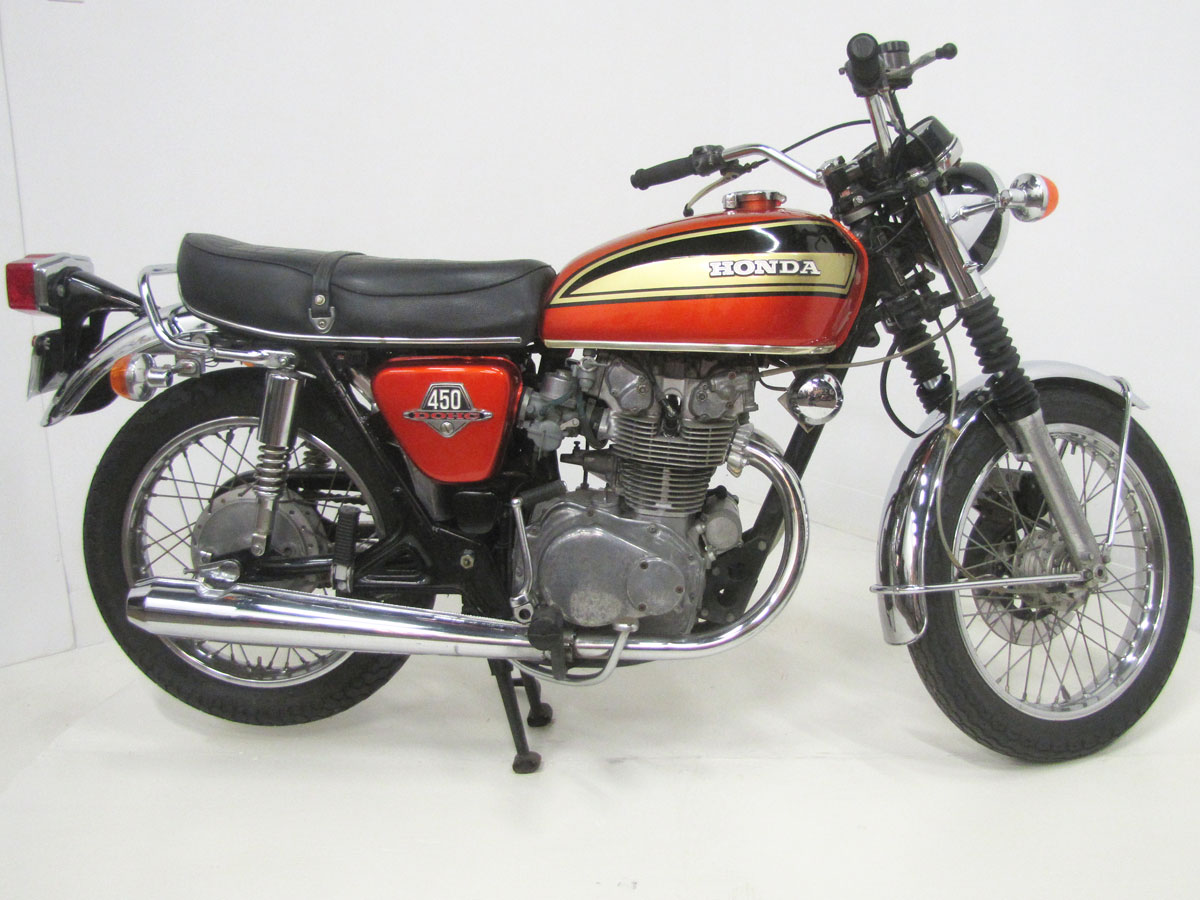 Not satisfied building “step-through” 50’s, 160’s, 250’s and 300cc class bikes, Honda developed the CB450 and ventured into a true middleweight bike offering to do battle with the British 500’s and 650s. When released in 1965 its styling met some resistance early on, though now “Black Bombers” are highly sought after. This example, from the final year of production shows the machine’s styling evolved nicely.

In 1965, the CB450, a 444cc double overhead cam sport and touring machine hit showrooms. It was available in black or red, with silver trim. Technically, the machine with torsion bar valve spring closure and constant velocity carbs was then greatly advanced, the first relatively cheap mass production DOHC motorcycle available. Was it fast? Cycle World road tests showed the CB450 not far off the Harley Sportster; quarter mile e.t. and speed for the XLCH, 14.25 at 95.03 vs 14.43 at 90.27 for the Honda, using a higher tech motor with half the displacement.

The CB450 was built in various iterations into the mid-1970’s, was never a really hot product until nostalgia for old Hondas took root, and the first CB450’s became desirable. Now all those cast off fenders and tanks that were thrown up in shop attics due to the styling update are worth hundreds of dollars to restorers. As a side note, the CB450 engine was used as a basis for the N360 and N600 automobiles’ engines which were the precursors to the Honda Civic.

Early on, besides the styling problems, there was also an upper end oiling problem that magazines picked up on. Warming the bike for up to a minute on cold starts helped but was unreasonable. All this cooled sales. In fact, styling “conversion kits” were soon hitting dealerships and the early “Black Bomber’s” “unsightly Honda hump” fuel tank along with the flared fenders and side-covers were pulled, and new tanks, seats, fenders and high-level pipes installed in shops to try and interest customers. By this time Honda was testing the CB750 in prototype form, a much more important project. On the bright side, Hondas in general had dependable electrics, solid, rev-happy engines, stout running gear and leaked little to no lubricant.

Honda started making motorcycles, small pure transportation oriented machines soon after World War II. A little over ten years later, in 1959, they were Grand Prix racing and open for business in the United States actively promoting Honda franchises coast to coast. When Honda celebrated its 70th Anniversary at the end of 2019, they stated they had hit the 400,000,000 unit milestone for global motorcycle production.