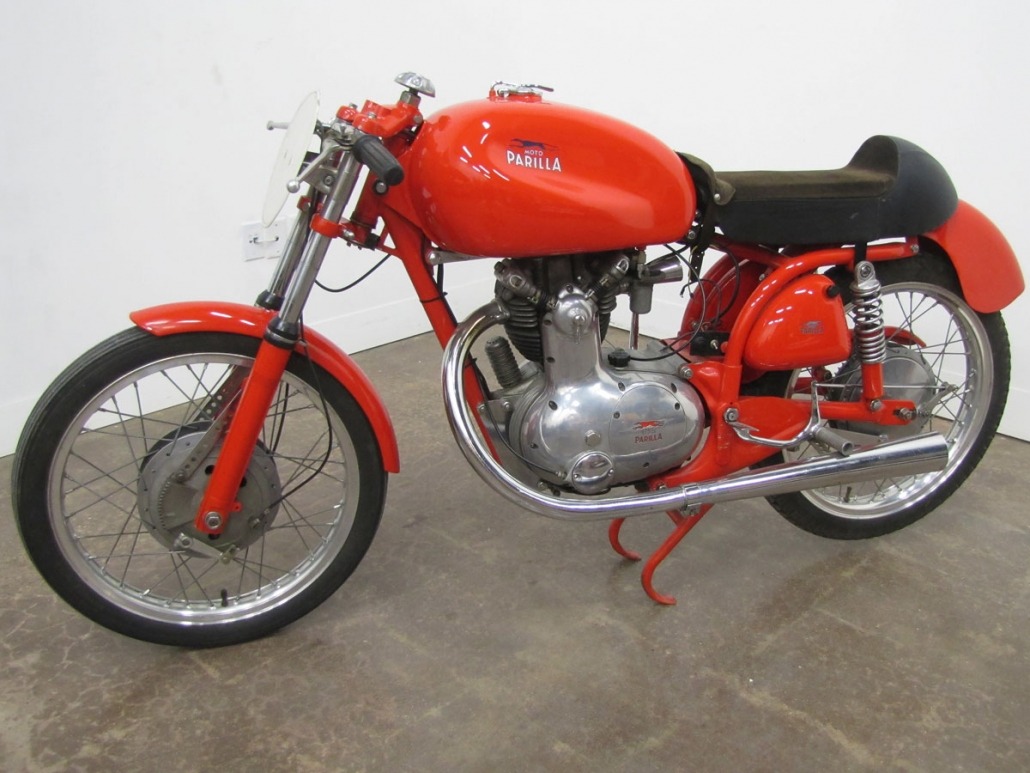 The company Moto-Parilla started just after World War II when Giovanni Parrilla built his first bikes, road racers somewhat based on the Manx Norton. The United States became Parilla’s biggest market. Typical of Italian motorcycles of the era, styling and design is well thought out, often a feast for the eyes. Italian makers focused on the 175cc category as it was the largest displacement permitted in the annual Motogiro d’Italia competition, a road race on Italian public roads that was suspended in 1957.

To help establish the performance image of the brand, the Parilla factory sent Giuseppe Rottigni to race their bikes in America. Rottigni won many races and created interest for racing Parillas. As with many smaller British and European brands, Cosmopolitan Motors based in Philadelphia, Pennsylvania, took over American distribution of all Parilla models and parts in 1957. Details are a bit murky on these machines as not a lot of records were kept. Running changes were made to engines and chassis as Cosmopolitan may have recommended to the manufacturer in Italy. But the Parilla was a true high performance machine capable of winning road races and scrambles type events.

In an era of flathead and pushrod overhead valve actuation from most American, German and British manufacturers, Parilla, like other Italian makers experimented with overhead cam set-ups. They tested tower shaft and chain driven cams, even gear driven cams to improve induction. Parilla’s original design for cam drive was by a small chain like Honda used at the time. The camshaft was mounted at the top of a tower in the left side crankcase cover. Referred to as a “high cam” design, the cam acted on two short pushrods, which operated the 90-degree-spaced valves via screw-adjustable rockers. The design, which came from Parilla’s engineer Salmaggi offered much of the advantage of an overhead cam engine, but with simple valve adjustment common to most OHV designs.

The later 250cc GS bikes were a USA-only model and only a reported 52 were imported to America. The GS is not a works bike, but a production race bike like a Velocette Thruxton or a Norton International. All the owner had to do was to remove lights, stands, install clip-ons and rear-sets, etc. and go racing.  The factory offered many performance parts to GS owners.

Parilla engines are appreciated for their style, or architecture as well as their performance. In the 1950’s, the company added two-stroke commuter bikes. All Parilla production ended in 1967. Today the brand is attached to extremely advanced e-Bikes in the dual purpose category.

Italian motorcycles from Ducati, Moto Guzzi, Cagiva, MV Agusta, Aermacchi and Gilera are among a wide range of European street and competition motorcycles you can view when you visit the National Motorcycle Museum.