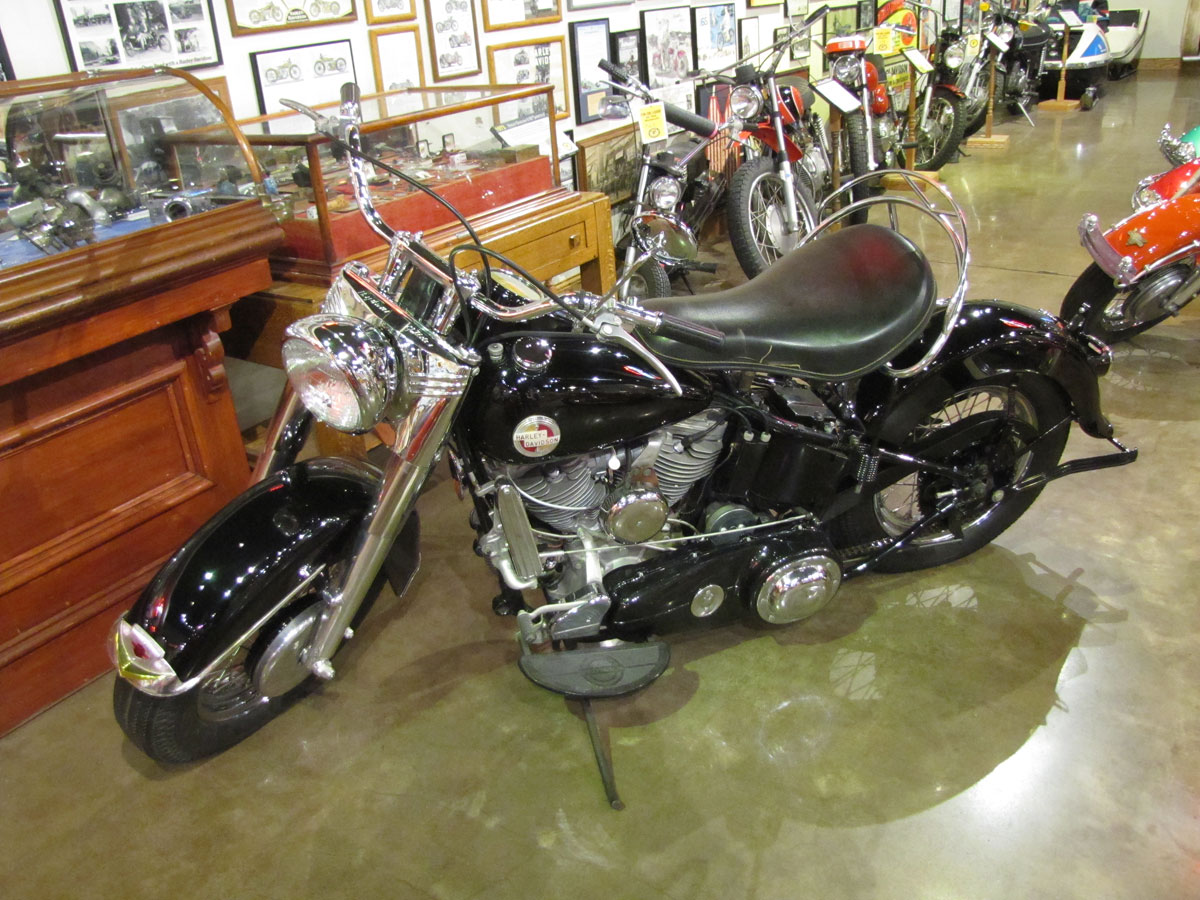 Following the first overhead valve twin launched in 1936, now known as the Knucklehead, a new OHV big twin engine was offered in 1948 in 61 and 74 cubic inch versions. The distinctive pressed aluminum valve covers led enthusiasts to later refer to this engine as the “Panhead.”

Streamlining was in full force by now and designers outside the Motor Company had contributed to the form and function. Brooks Stevens, famed Milwaukee Industrial Designer brought the look to the new Hydra-Glide in 1949. The forks, headlight nacelle, dashboard, distinctive fenders, tombstone taillight and chrome speed stripes were among his studio’s lasting contributions. In 1952, foot shifting became an option, in 1958 rear suspension became standard with the introduction of the Duo-Glide. In 1965 electric starting came along with the Electra-Glide. This 1957 FL is the last of the rigid FL’s and is equipped with a buddy seat and grab rail but otherwise holds a lean, stripped appearance.

The chassis on the first new post-World War II Harley-Davidson touring model, the 1948 Panhead, was very similar to the double down tube version that came with the original “Knucklehead,” though down-tubes were bowed, or “wish-boned.” It was still a rigid and used a strong springer fork, but this lasted only one year, 1948.  Beginning in 1949 the Hydra-Glide with a hydraulic fork was being produced. While our country was at war in Europe, Harley-Davidson engineers were also making a “new and improved” engine. For the first time in many years, the heads were cast from aluminum, the lifters were switched to hydraulic and lubrication as well as induction and combustion were improved.

To many the traditional “rigid” Harley frame is iconic. It meant a lot to custom builder Bill Davis of Road Worx. In the late 1970’s his shop adopted the look making the rear frame section a swingarm but hid the shocks below the transmission on a complete, commercially available frame. Later, Harley Davidson bought Davis’s patented design creating what they called the Soft Tail, released in 1984.

There are numerous Harley-Davidson Panheads on display in the National Motorcycle Museum for comparison of engineering and design features over the 18 year production run leading up to the Shovelhead in 1966.