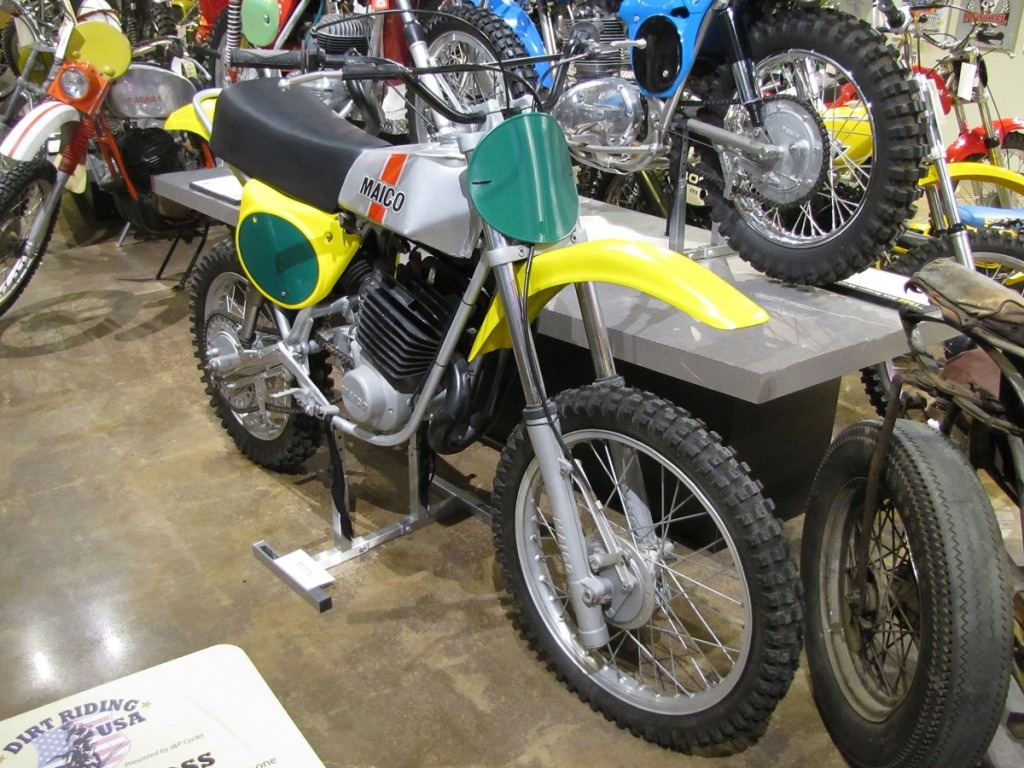 A 1976 Popular Cycling road test of the Maico 250 AW awarded 99 out of a possible 100 points for the motocross bike. And reading early 1970’s motorcycle journals, the Maico is the weapon of choice. Maico lore also holds that not all Maicos were dependable, sometimes vibrated themselves apart, hence the “Maico-Breako” moniker has stuck through many decades.

In an effort to tie racing success to sales, manufacturers often name bikes for riders, sometimes race tracks. Adolf Weil, for whom this 250/5 AW “replica” is named, was born in 1938, almost perfect timing for the exploding 1960’s European motocross scene. Weil competed in the FIM 250cc and 500cc Motocross Grand Prix world championships as a Maico factory rider during the 1960s and 1970s. Weil finished second to Håkan Andersson in the 1973 250cc World Championship, and finished in third place three times in the 500cc World Championship, never quite capturing an international title. But Weil won 14 German motocross national championships and won the U.S. 1973 Trans-AMA championship at the age of 34. He was known as the ‘Iron Man’ of motocross as he competed for over 20 years against much younger riders. Weil retired in 1978 and ran a bike shop in Germany with his sons Frank and Jürgen. Those in-the-know regard the AW initials as evidence of the accomplishments of this notable German rider.

The German company Maico was founded by the Maisch family about 1926 and initially made small two-stroke engines for other manufacturers much as BMW supplied their boxer design to others early on. Maico began making complete motorcycles after World War II, also scooters, micro-cars and go-kart engines. In the 1970’s Maicos were noted for their “coffin” shaped alloy fuel tanks, stout frames, long travel suspensions, handsome radial heads but somewhat crude engine castings. The company Wheelsmith modified the already good Maico frames to provide longer suspension travel and offered other performance accessories as well.

The Maico trademark has had several owners since the original company closed its doors about 1983. Design and manufacturing quality problems in the transmission and rear suspension conspired to ruin the Maico name in 1982 and 1983. Family disputes and financial errors finally brought bankruptcy. At the same time the Japanese brands made better showings in racing partly through studying the best European machines, partly through buying out the best riders. Wolsink, Eirstedt, Stackable, Mosier, Staten, Hart and DeSoto were all persuaded by Japanese companies to switch and they advanced their careers further. As with street bikes, British and European off-road bike sales slipped further. Yet today, the Austrian maker KTM dominates in many forms of racing, and that origin is found in the late 1960’s work of the great John Penton.

This Maico was donated to the National Motorcycle Museum by Tina and Kevin McGill of Hawaii. It’s one of over 25 machines they have donated and is the impetus for the DIRT RIDING USA presented by J&P CYCLES exhibit now at the Museum, nearly 50 fine enduro, trials and motocross bikes and great period advertising materials.