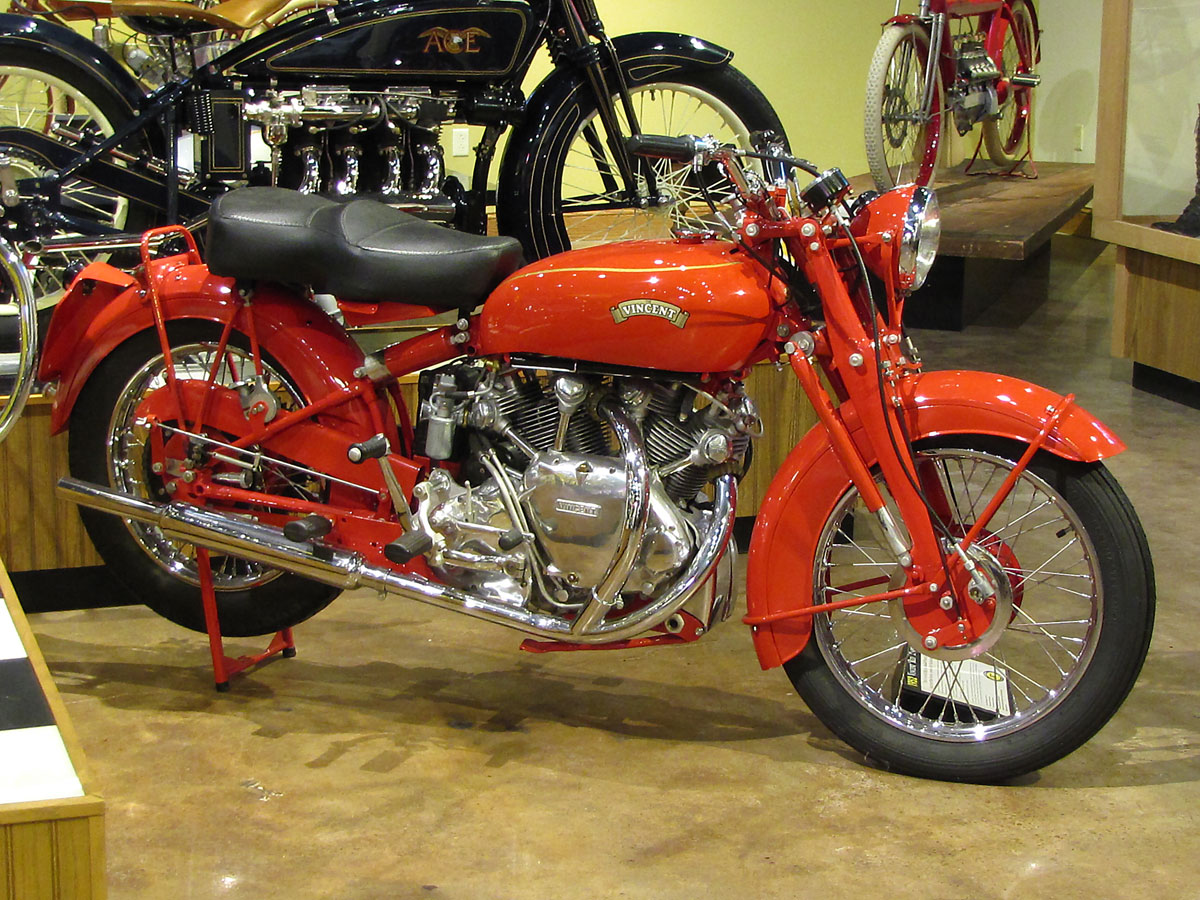 The red bike pictured here is an extremely rare documented red Vincent Rapide Touring with the color-matched valanced fenders; some versions used a few black accents, were not solid red. The next time you visit the Museum you can review it and several other Vincents.
The Vincent Rapide was the basic moderate performing machine, the Black Shadow the hot street bike, the Black Lightning the Factory Racer, and there were 500cc singles named Comets as well.

The machine of songs, speed records and other lore, there’s no motorcycle like a Vincent. A British machine conceived with no compromise to perform and impress, the Vincent was made from about 1928 but really hit its stride after World War II with the Series B and C Black Shadows. This was near the end of production which came about in 1954. Only 11,036 Vincents are said to have been produced.

Perhaps a Land Speed Record racer named Rollie Free gave us one of the best known Vincent images when he was photographed at speed at Bonneville Salt Flats doing 150+mph, completely prone on the highly modified Vincent Rapide wearing a Speedo and helmet. But songwriter and musician Richard Thompson also brought us his song Vincent Black Lightning further sealing the brand into our mind’s eye. We get to visualize a mortally wounded bandit, his girlfriend, Red Molly, next to his hospital bed receiving his keys and riding off with his Black Lightning, the best of Vincents with less than a few dozen made.  Said James to Red Molly, “I give you my Vincent, to ride.”
Specs? Vincent Rapides are 998 cc 45 horsepower machines with four-speed transmissions and many interesting mechanical details that are a feast for the motorhead’s eyes. If you visit the National Motorcycle Museum in Anamosa, Iowa, you can see half a dozen of these fabulous machines in stock and competition form, a Comet and a Shadow built for Bonneville, and a Rapide built into a Bobber.

The VanBuren Sisters and the Indian PowerplusPlymouth Monster and Bonneville in 1935: One Man’s Dream for the World’s... Scroll to top