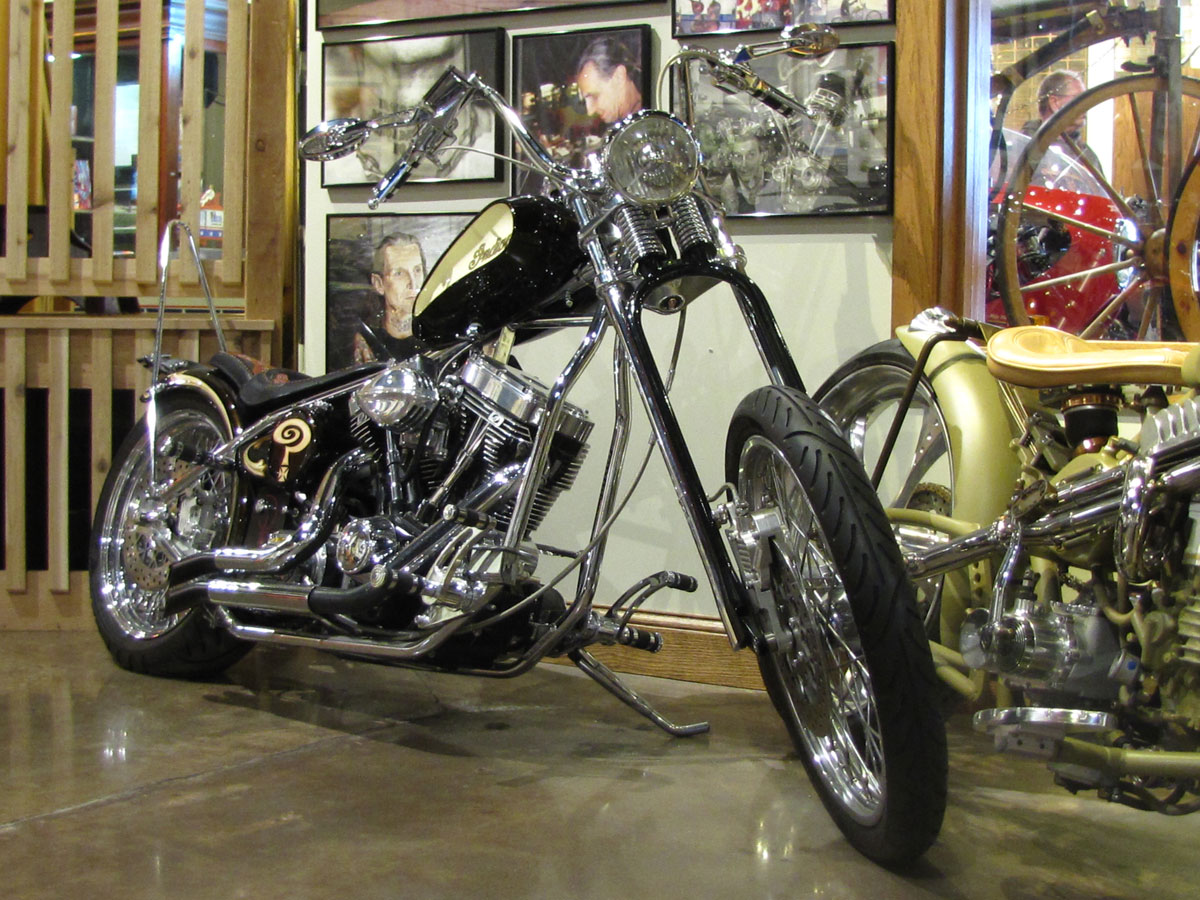 In 2005, Kody Wisner, and some helpers built a fine custom Indian motorcycle as a tribute to INDIAN LARRY. Along with numerous pieces of Indian Larry-related artwork, the machine has been on display at the National Motorcycle Museum for many years, occupies a prime space in the custom motorcycle gallery. It sits alongside the work of builders like Arlen Ness, Jesse James, Don Hotop, Dave Bell, Tommy Summers, Ed “Big Daddy” Roth, Jerry Magnusen, Ron Finch and others. What prompted Kody and the others to build this bike, what passion drove them is explained by the eloquent author/journalist/motorcycle historian Paul d’Orleans, speaking of Indian Larry:

“Champion of tradition, leader of the old-school revival”
Of all the urgent proclamations made about the chopper from the 1960s onwards, whether in books, magazines, or film dialogue, the genre never found an eloquent spokesman to explain the fundamental appeal, the depth of its meaning, or how an aesthetic relates to a lifestyle. While plenty ‘lived the chopper life’, descriptions of that life remained a series of clichés, and didn’t touch the soul of the listener. That was remedied in one man, Larry DeSmedt, a natural philosopher and talented artisan, whose incredible charisma and soulfulness meant the chopper had finally found a voice. The machines he built, and his attitude towards customizing, remain an enduring legacy of a very special man.
Paul continues, “Indian Larry, as he came to be known (he rode an Indian in the 1980s) is generally credited with reviving the style of chopper building popular before ‘Easy Rider’, the true old school before long forks arrived. Larry preferred a sharp-handling machine, reflecting his experience riding on the streets of New York City. He and Paul Cox were tutored by 6th Street Specials owner Hugh Mackie, and in 1994 they formed Psycho Cycles; fame followed on the heels on the TV popularity of ‘fat tire’ choppers, with Larry and Paul’s work seen as an antidote to the gruesome bombast of unrideable show choppers. “As far as I’m concerned, [the chopper] is one of the highest art forms, because it combines all media; sculpture, painting, as well as the mechanics, and it’s just a lot more than any one single medium.” The world of customs lost an eloquent spokesman when Larry died in 2004.”

If you haven’t already seen this machine in person, make sure you locate it on your next visit to the National Motorcycle Museum. You can also view the paintings, prints and photos several artists have made in honor of Indian Larry.
PreviousNext
1234567891011121314151617181920212223
2 replies