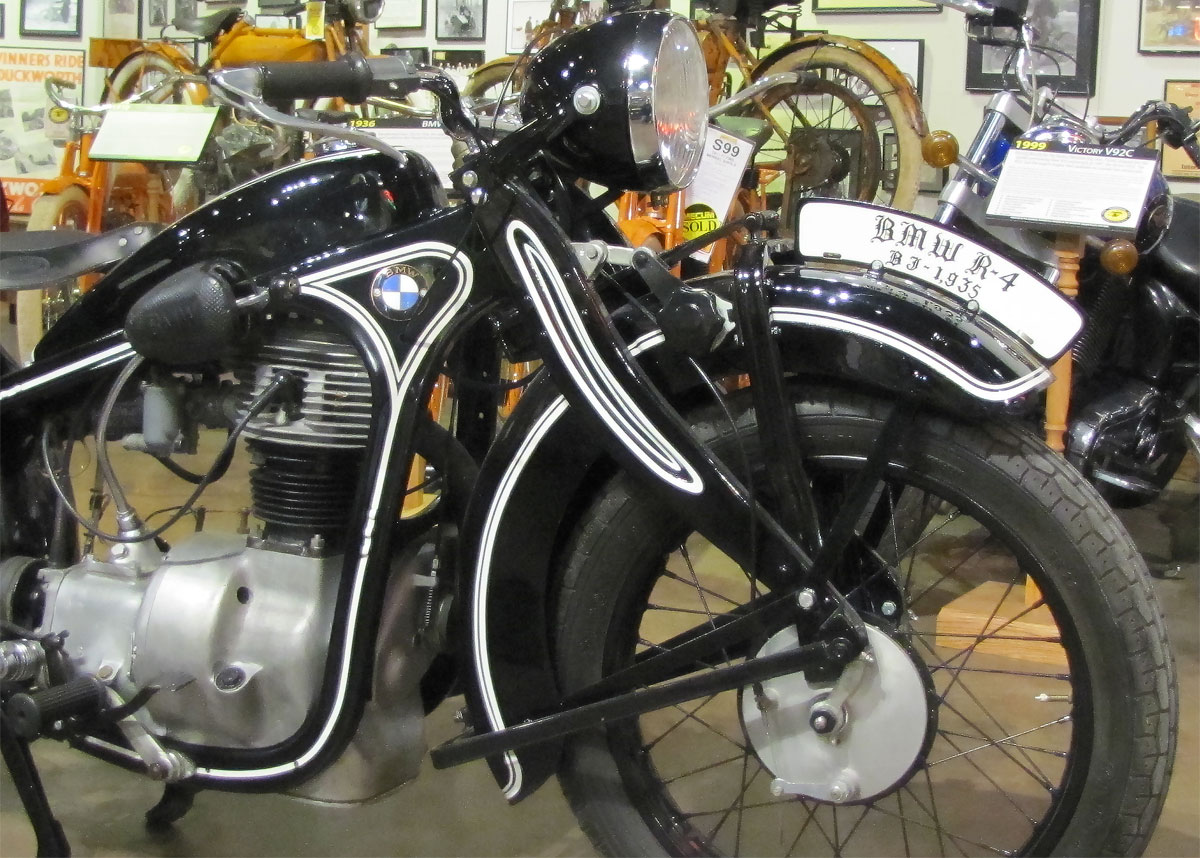 The next time you visit the National Motorcycle Museum, you’ll probably see this 1935 BMW R-4 among other European bikes, on loan as part of the collection of over 400 motorcycles at the Museum.

Manufactured from 1932 to 1936 in several versions, the single cylinder R4 is a rugged workhorse then favored by German police and military. This is a basic transportation BWW using a 14 horsepower 398cc overhead valve single with enclosed valve gear, shaft drive and a channel section pressed steel frame. Suspension is by trailing link fork and sprung seat as there is no plunger or swingarm rear suspension. At this time BMW also offered touring and sport machines with their twin cylinder “boxer” engine, a BMW tradition and a design in use continuously to this day.

This pressed steel frame design is rather ingenious. Major component mounting points are part of the main stamping and their is little or no use of tubular steel stock. There is no rear suspension, though the seat is sprung. Folding footboards and a luggage rack accommodate an occasional passenger. Shifting is via a stalk from the top of the transmission case, a true “stick shift” with a hand operated clutch. Note handlebar controls are reversed as a safety feature. A front stand is offered to simplify wheel changes. Tasteful hand applied striping accents the R4’s lines.

BMW was formed from Rapp Motorenwerke in 1917. After Karl Rapp left the company the new, more talented chief designer, Max Fritz, moved the company to build all sorts of engines through about 1921, though the Treaty of Versailles prohibited their manufacture of aircraft engines. These early utilitarian engines were supplied to motorcycle manufacturers. By 1923 BMW moved to manufacture its own complete motorcycles. From the beginning, BMWs have been shaft drive, though some more recent models also use toothed Gilmer-style belts on pulleys, other models roller chains in their final drive. Note that BMW did not invent shaft drive for motorcycles. It shows up on many earlier motorcycles including the 1912 Pierce, also on display at the Museum.

Merry Christmas from The National Motorcycle Museum Scroll to top