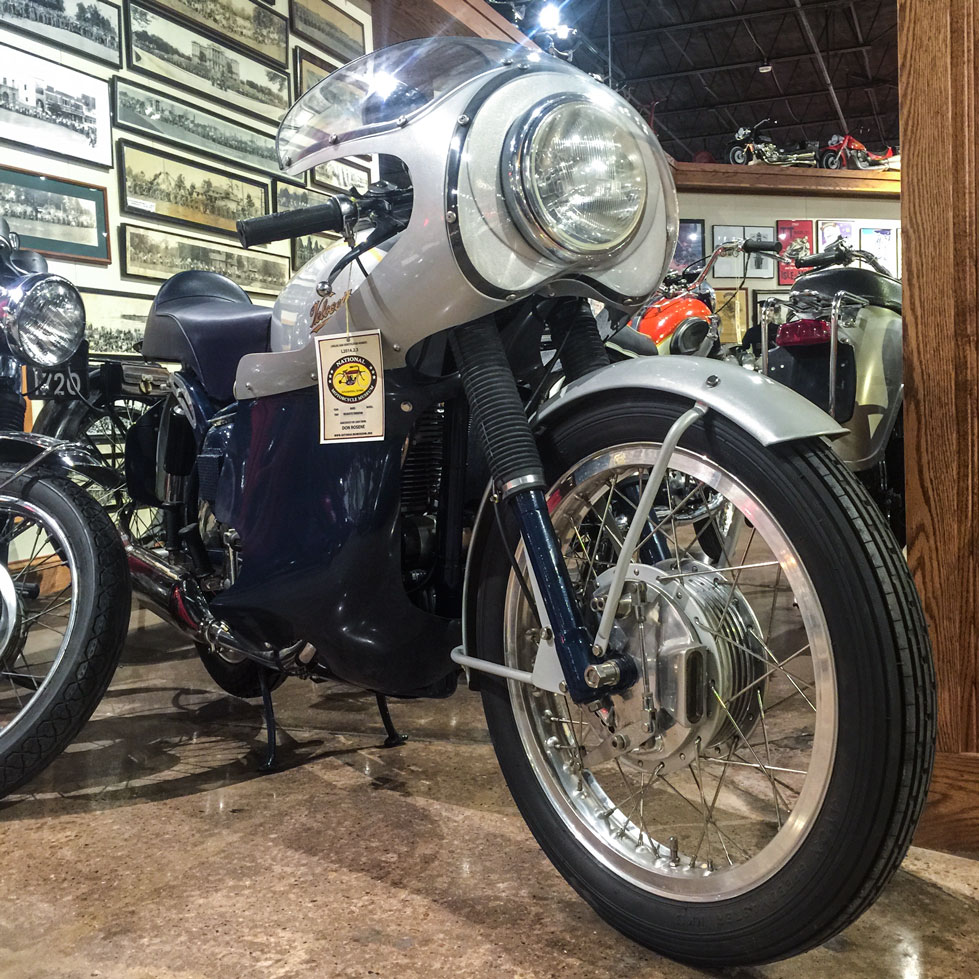 This perfectly restored Thruxton has all the elements of a classic high performance British street bike. With a stout chassis, a torquey short stroke high cam engine and big brakes, the Velocette Thruxton was one of the last, one of the best, British “big singles,” the prototype cafe racer. Clip-on handlebars, steering damper, bump seat, dolphin fairing, “bread loaf” tank, velocity stack, ventilated front brake, rear-set footrests, all the right stuff. A demanding rider would be at home on any winding road or road racing circuit. This superb example is on loan to the Museum from Don Rosene, Anchorage, Alaska.
Much like we have Triumph Bonnevilles and Manx Nortons, the Velocette Thruxton is named for its association with a competition event. In the 1950’s the South Hampton Motorcycle Club began organizing a nine hour endurance race around the Thruxton Air Field, Andover, Hampshire, England. It became known as the Thruxton Nine Hour, then the 500. With privateer Velocette riders having good success there, a specially tuned model Velocette Venom was added to the Velocette catalog; the Thruxton. Its new cylinder head had a downdraft intake port, finned manifold, an Amal GP carburetor (in early models), twin leading shoe front brake and a stouter fork.
Precursor to Velocette, Veloce was founded in 1908 and was always keen use racing to promote and improve their machines. When in 1967 the Isle of Man Production TT was established, Velocette entered “stock” machines, garnered first and second places. Though experiments with motorcycles by founder John Goodman go back as far as 1908, the first really successful motorcycles to carry the Velocette name were on English roads in 1913. Just after World War I they were using two- and four-stroke engines in the Isle of Man TT race entries. A few final Thruxtons were constructed in 1971.

"Walter," the Harley-Davidson Forecar pays a Visit to the Museum

The Passing of Great Motorcycling Friends, Margaret and Mike Wilson
Scroll to top