The National Motorcycle Museum has become quite a cross roads for all sorts of antique and vintage motorcycling. John Parham, long time collector and president of the Museum practically lives there and welcomes in almost daily collectors of motorcycles, toys, artwork, photos and more, even old oil cans and great porcelain signs. 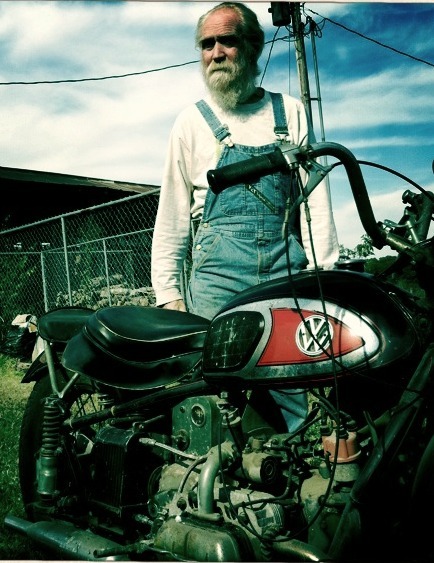 John knew Mike Wolfe for about 20 years before he became a celebrity through the television hit, American Pickers. So Mike makes it a point to stop by and see John when he’s in the neighborhood, or has some super new find he wants John to see, maybe even own. But then sometimes, Mike keeps the coolest things he finds, like many of us do. Such was the case recently.
What is a picker? In case you don’t already know it a picker is the first guy to lay eyes on a neglected, hidden, forgotten interesting object from our past. Pickers knock on doors out in the country if their sixth sense says the barn holds an old motorcycle or car or just a fine nickel plated kerosene lamp from the late 19th Century. Pickers know what’s good, dig it out, dust it off and for the first time in maybe 50 years identify it, price it and try and sell it for what it’s really worth. Mike Wolfe is a real picker, has been for most of his life. And Mike likes to share his finds with John Parham, and the National Motorcycle Museum. Case in point, the Von Dutch XAVW motorcycle Mike Wolfe recently scored. 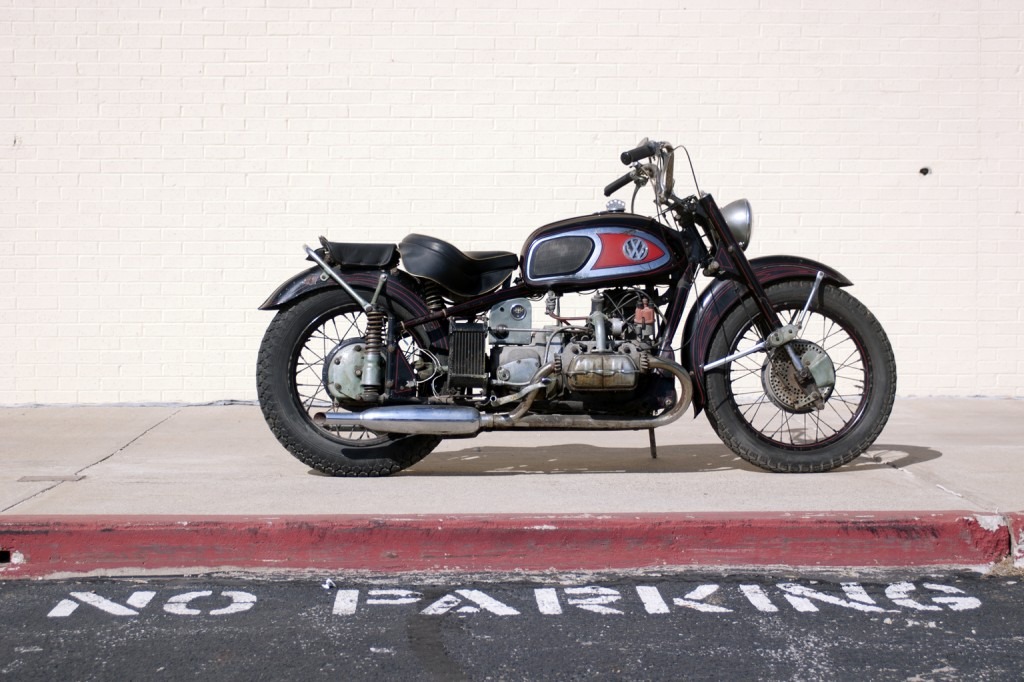 Mike got a call one day from a friend telling him about a Von Dutch motorcycle. Two things probably popped into Mike’s mind. First; BOGUS!, because Von Dutch stuff is so rare. Second; I’d better get there quick before someone else does. And he did. What he found was the bike Von Dutch had built around 1966 along with paperwork that had Ed “Big Daddy” Roth as a past owner. He made a deal on the spot and took the motorcycle home with him. Real pickers don’t fool around when they find something great.
What’s so special about the XAVW? Most people know Von Dutch for his artistic classic pin-striping and some know he has painted a few bikes, written some strange prose, made some knives and pretty whacky sculptures. But working with a Harley-Davidson XA, a World War II shaft drive machine that’s relatively rare now, some Moto Guzzi components and a 36 horsepower flat four Volkswagen engine he joined some cool components and built a completemotorcycle. A complete Von Dutch motorcycle. That’s rare. 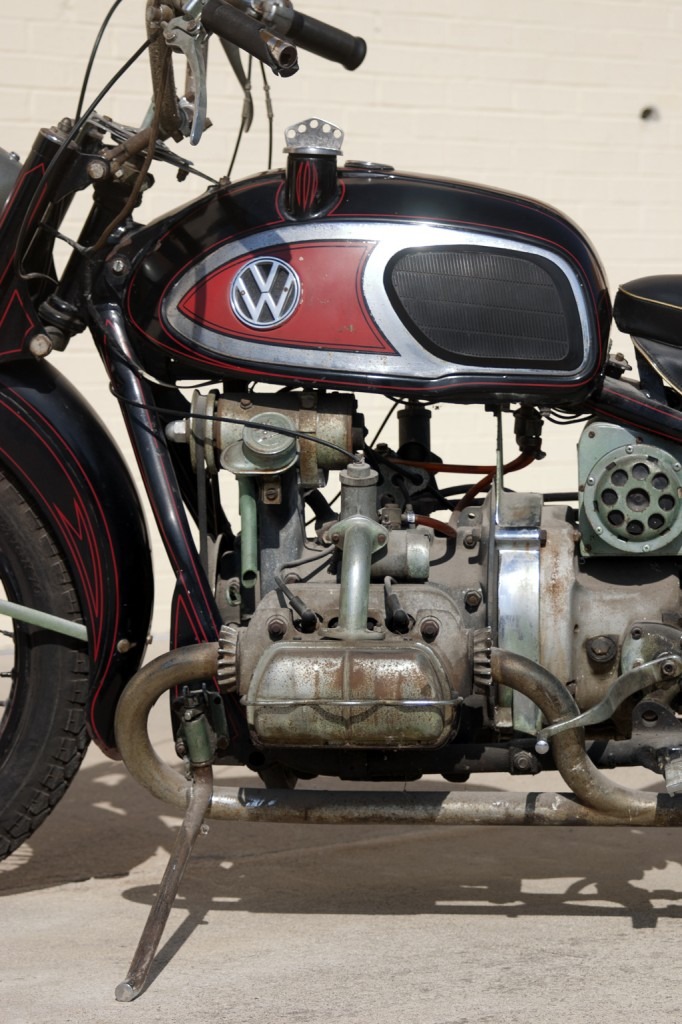 After showing the bike at TorqueFest in Iowa this summer Mike made a deal with John Parham to lend the bike to the Museum for display. The museum has lots of bikes and memorabilia on loan which keeps things there changing, always new. You can head over to Anamosa, Iowa any day and sit down right beside the bike, study it and consider all the thought and the work Von Dutch put into it. It appears he had to stretch the frame, make it wider to get the VW engine to drop in. Amazingly a lot of other pieces lined up well as he mated the engine to the XA clutch and trans. He even made the kickstarter work. Forks are early 50’s Moto Guzzi and the seat may be as well. Visually the components all fit together really well, even the form of the Guzzi fenders connects well with the mid-sixties Honda CB450 gas tank, especially with Von Dutch’s two tone paint and striping. Even the VW badge fits well artistically. But anyone who has done work like this knows the challenges. Looks easy, maybe, but this was a lot of work and the outcome must have made Von Dutch grin. 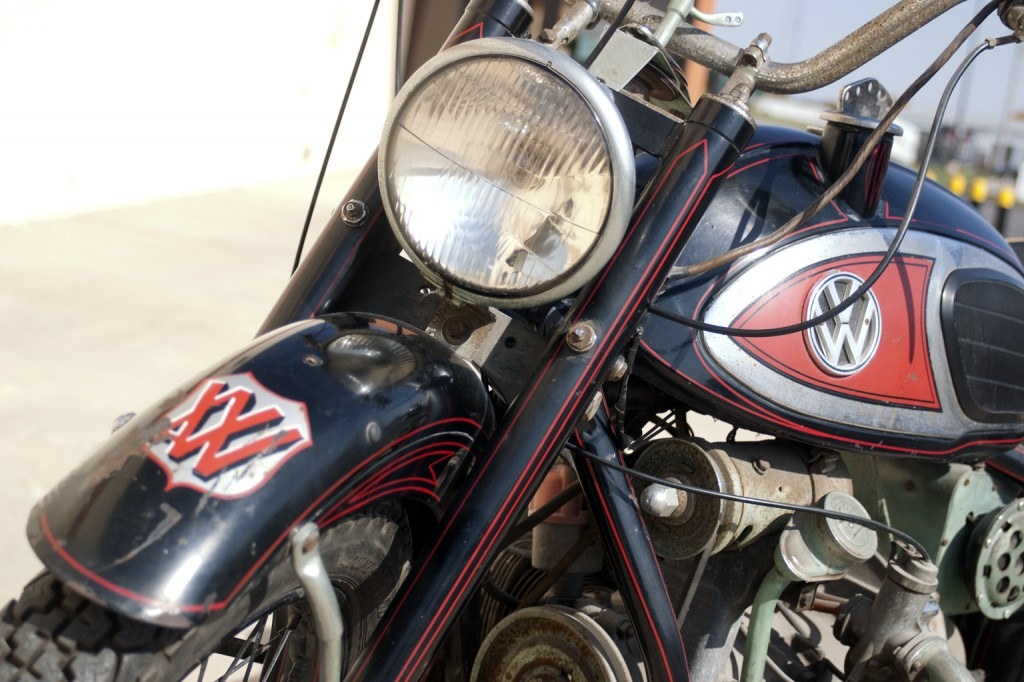 At the Museum the XAVW is parked next to a Triumph Von Dutch painted and some other great Von Dutch creations and paint work. It’s one of over 400 motorcycles at the NMM, and one of about 30 custom bikes, and in a sense one of the most radical, even if it doesn’t gleam with a ton of chrome. It’s another marker of the accomplishments of one of the most revered artists in the motorcycle and custom car world. Pickers, creatives and visionaries like John Parham come together so you can get side by side with some great Von Dutch creations any day of the week at the National Motorcycle Museum. 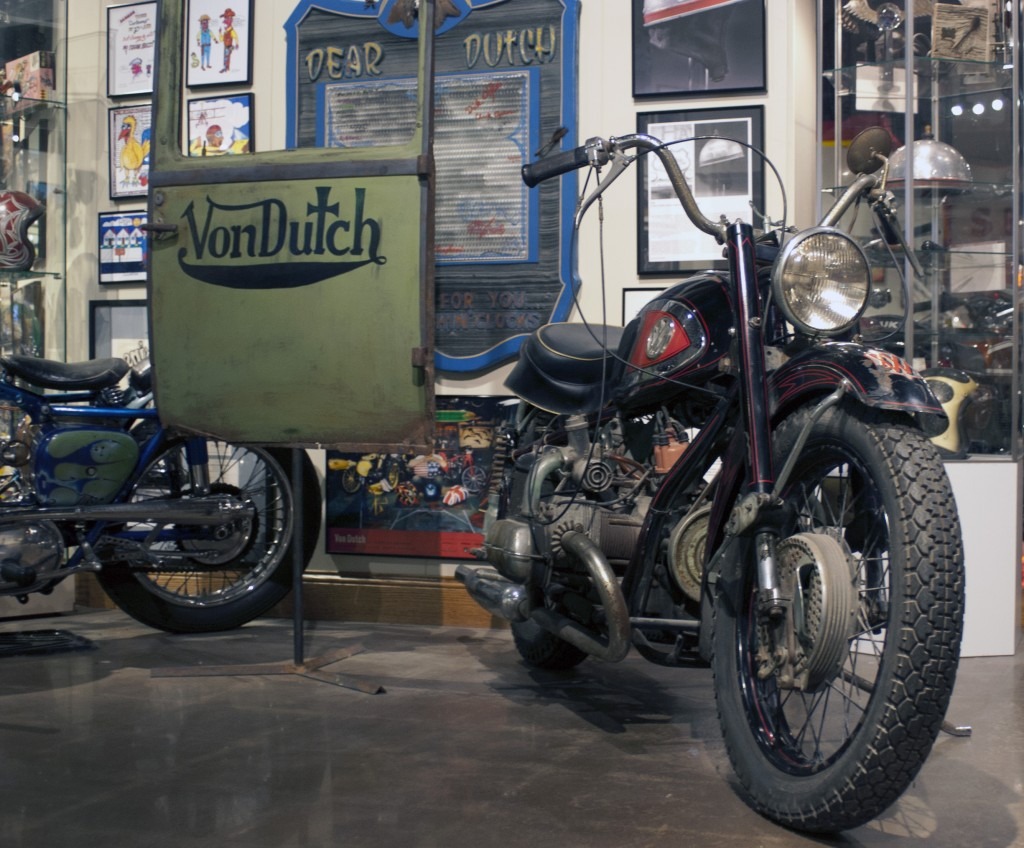