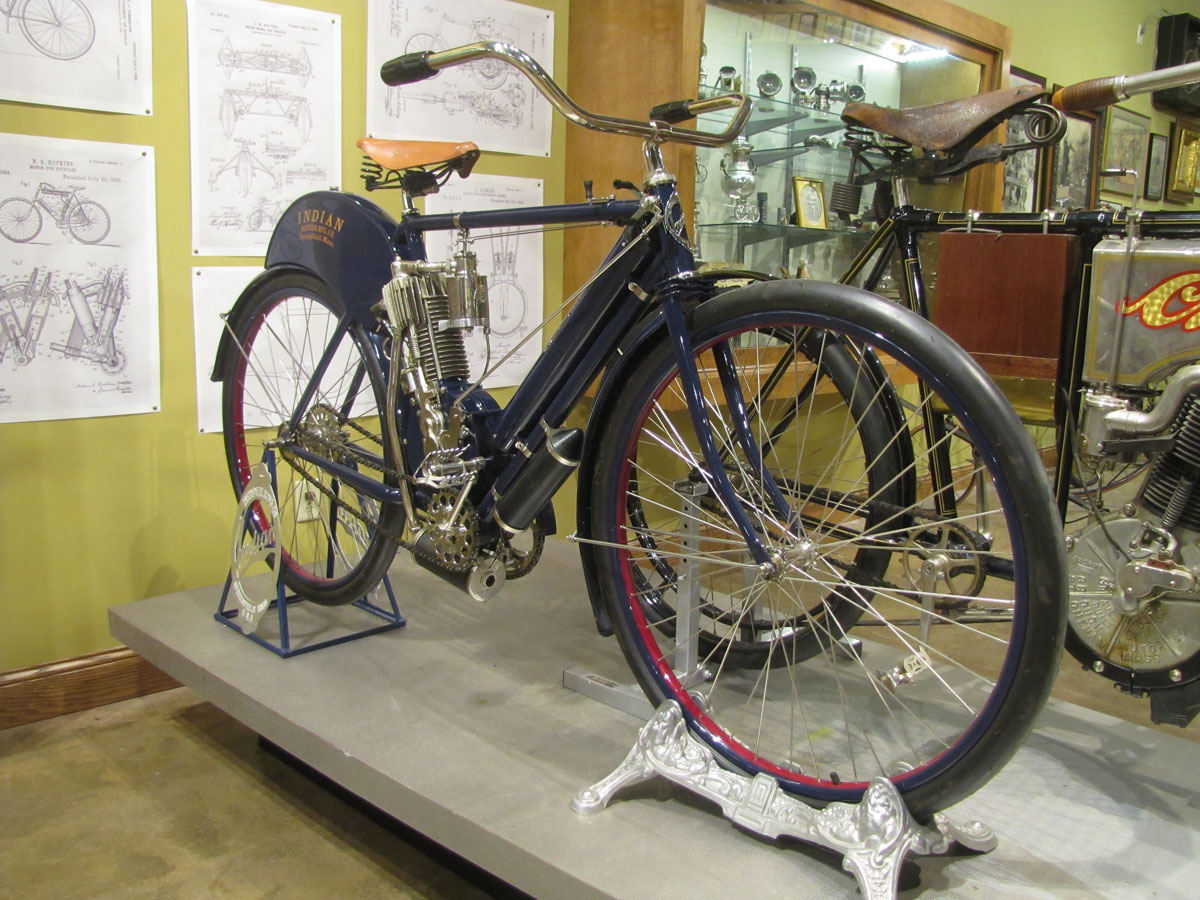 George Hendee, a champion bicycle racer and bicycle manufacturer, and Carl Hedstrom, the maker of a bicycle racing “pacer”, met in the late 1890’s. Pooling their talents they began creating their first prototype for a production motorcycle in 1901. Together they created a refined machine, one of America’s first mass-produced motorcycles.

Though of specific Indian design, and related to the 1900 patented engine design of Emil Hafelfinger of New Jersey, a derivative of the French De Dion-Bouton design, engines were produced by Aurora Automatic Machinery Company of Aurora, Illinois. Strong bicycle-style diamond frames were made in a small shop in Springfield, Massachusetts. By 1909 Indian finally moved to a loop frame design lowering the engine and the seat height. Various components were sourced from suppliers, some in the bicycle trade.

1902 was the first real production year for Indians. By 1905 only about 1000 Indians had been manufactured. By 1907 engineer Hedstrom had designed and patented a better carburetor; induction was a weakness of early internal combustion engines. With star rider Jake DeRosier, Indian was a force to be reckoned with on America’s booming board track racing scene. Hedstrom continued to build better racing engines most often staying ahead of the competition, and helping to sell “street” motorcycles to the public.

Manufacturing of all Indians related to the original Springfield, Massachusetts corporation ceased in 1953. Since that time the marque has been revived several times and is now a strong brand within Polaris Industries of Minnesota.

When you visit the National Motorcycle Museum you can take in this very early Indian from the John and Jill Parham Collection. It’s part of the Early American Transportation INNOVATION  exhibition which includes the 1911 Steco Bi-Plane. There are Indians in other exhibition areas as well, machines all the way up to a 2001 Indian Chief made in Gilroy, California. Also on display are numerous board track and dirt track racing Indians, and a complete history of the original company, 1901 – 1953.