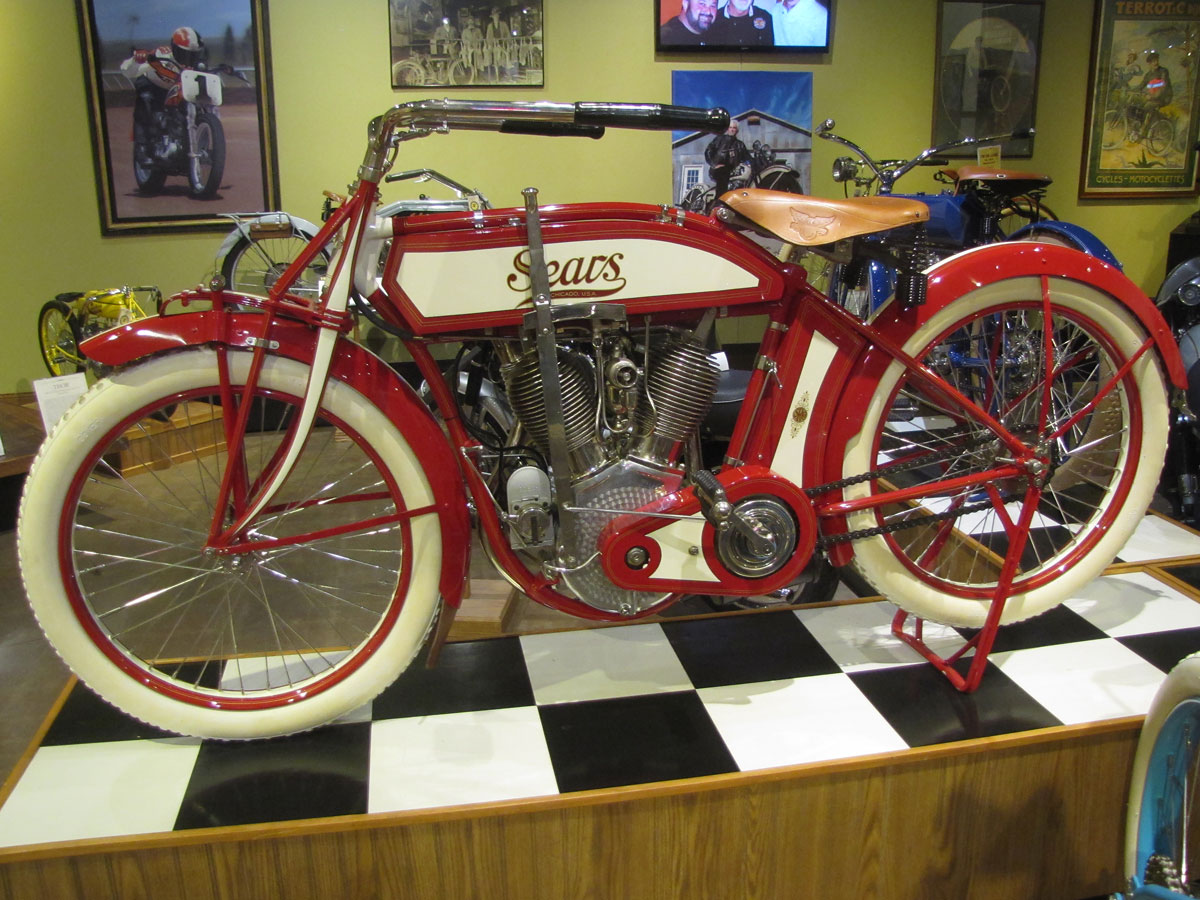 The Sears DeLuxe Dreadnought was built to specifications and featured top quality components. Power came from a 9 horsepower inlet-over-exhaust V-Twin engine sourced from F.W. Spacke Machine Company of Indianapolis. This 70 cubic inch DeLuxe engine, shared by other manufacturers such as Dayton, Eagle, Minneapolis and Crawford carries Fred W. Spacke’s brand name, DeLuxe, cast into the crankcase. It had a reputation for power such that it was also fan-cooled and used in cycle-cars; very lightweight, narrow automobiles popular for a short time in the early 20th Century.
Chain final drive was to a single speed or optional two speed rear hub. It is said that Sears had their motorcycles made to price, and that they used known racing performance proven components instead of funding factory racing programs as their competitors did. The name Dreadnought was adopted from the name of cutting edge battleships of the early 20th Century.
Sears, Roebuck, the once giant Chicago based chain of department stores, and mail order cataloger, first added a motorcycle to its offerings in 1912. Given that their catalog sales were the lifeline to remote, sparsely populated areas of America, their product had to be simple, tough and easily maintained, possibly by novices. The Sears DeLuxe Dreadnought Twin, like the one on display at the National Motorcycle Museum, and its companion single were all of that.
Production of the Dreadnought lasted until 1916 when Sears stopped sales for unknown reasons. Post WWII, Sears, under their widely used Allstate brand, brought in mostly Gilera motorcycles and Vespa scooters from Italy, and Puch motorcycles, scooters and mopeds from Austria. Powerfully marketed up to date product offerings from Japan are probably what made Sears give up motorcycle and scooter sales altogether in the late sixties. But around that time many of us spent our early years on Allstates of every shape and color.
The early Sears twins and singles are interesting and very rare. If Sears had morphed into an online marketing giant like Amazon, aside from trade laws, might we still be buying our motorcycles via catalogs, but of the online variety? When you visit the National Motorcycle Museum you’ll find this Sears in the Hagerty Best of the Best Gallery. Nearby is a Curtiss, a Reading-Standard, a Thor, an early Husqvarna twin road bike and the rare original condition 1911 Flying Merkel racer.
Note: In the 1910′s there were two Excelsior motorcycle manufacturers, and both were in Chicago. The maker of this Sears motorcycle is not the Ignatz Schwinn “Excelsior” that is bicycle and motorcycle associated, not the one called Excelsior Motor Manufacturing and Supply Company, but rather Excelsior Cycle Company of North Sangamon Street, Chicago, Illinois.
Specifications: