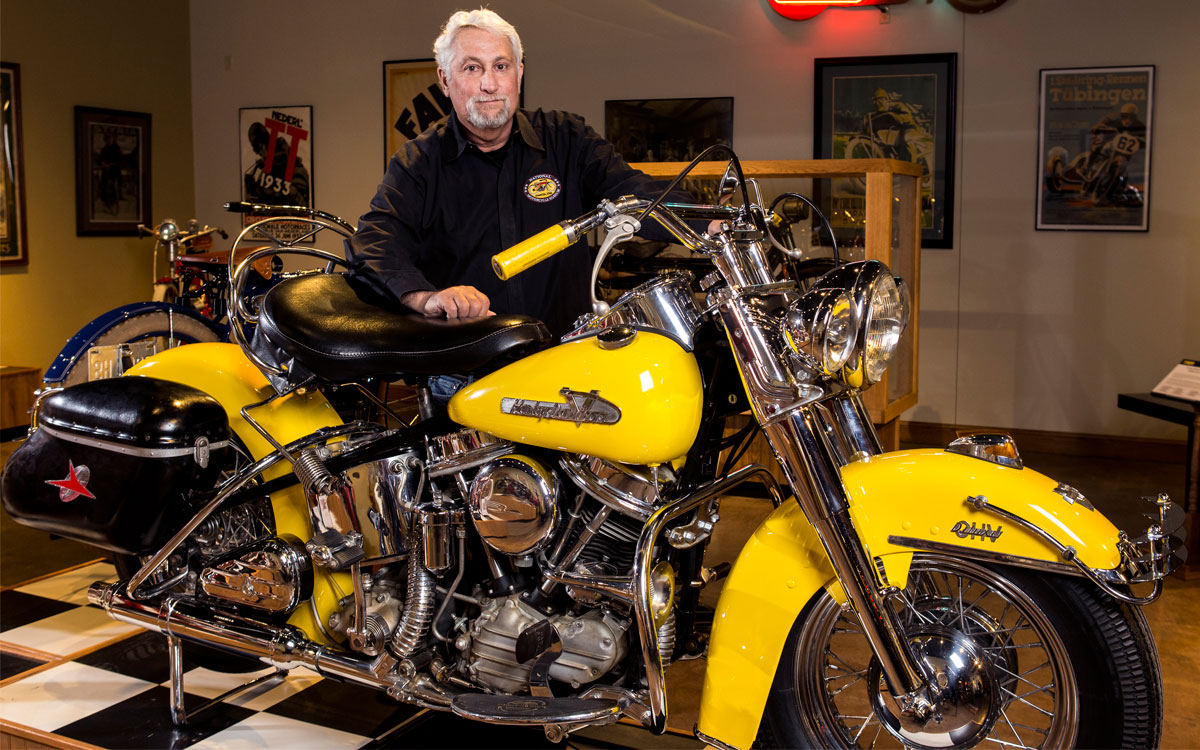 The year is 1979. At an Indiana swap meet a man and his wife find the Harley-Davidson of their dreams, a yellow 1955 FL Hydra-Glide. Putting together about all the money they had, including their IRS refund, they buy it a week later for more than they felt they bargained for. It’s restored once. Five years later the Pan burns in a fire at J&P Cycles. It gets restored again. In 1991 expenses at J&P Cycles get way out of control. A 1939 Harley and the yellow Pan are hocked to cover payroll and a delinquent bank loan payment. Two years later, the Pan is bought back. This time for good, and it gets restored yet again to its original yellow.

“The bike sort of tells the story of J&P Cycles. We started our swap meet and catalog business small, began to grow, got successful, then went out of control. The bike suffered ups and downs similar to those of our lives and our business, even kept us in business when money was tight.”

Those are the high points of John Parham’s life with his favorite Harley-Davidson, and he has owned many. Most know John as the founder of J&P Cycles. DealerNews, a venerable motorcycle industry publication some years back called J&P Cycles the largest after-market motorcycle parts retailer in the world. Over the past few decades, times have been good and times have also been tough for members of the motorcycle industry like Parham. But he has come out on top through very close attention to the details of his business, sometimes ignoring “experts,” sometimes listening, but always following his instincts.

Coincident with his love of old motorcycles and motorcycling history, John saved the financially strapped National Motorcycle Museum, originally in Sturgis, South Dakota, and re-chartered it in his home town of Anamosa, Iowa. Many of Parham’s motorcycles make up the collection of over 450 now on display. When asked how many Harleys he has, Parham says it’s probably about 65, with some really great bikes including an 1908 “Strap Tank” Harley. In raw dollar value the yellow Panhead is well down the list in Parham’s collection of over 200 motorcycles, but Parham offers, “While I have been lucky enough to gather many great, rarer and much more valuable bikes in my collection, the ’55 Pan has the greatest sentimental value to me; it ties to my life experiences with my wife Jill and also to the development of J&P Cycles.”

Life is good for Parham’s 1955 Harley-Davidson FL these days. When you visit the National Motorcycle Museum in Anamosa, Iowa it sits close to the entry of the Best of the Best Gallery surrounded by machines that would fetch 10 to 20 times as much as the fine yellow ’55 Pan. “Jill’s happy we got it restored it back to its original yellow. I’m just happy to still own a bike that went through so many trials and tribulations with me, a bike that means so much to me.”

Motorcycle Details: 1955 Harley-Davidson FL Hydra-Glide
Beginning in 1949 the all new design Hydra-Glide with a hydraulic fork was introduced. Not since 1936 had Harley’s big twin been given such a makeover.

A new OHV big twin engine was first offered in 1948 in 61 and 74 cubic inch versions. Though the bottom end was little changed, for the first time in many years, the heads were cast from aluminum. In addition, the valve lifters were switched to hydraulic and lubrication as well as induction and combustion were improved. The distinctive valve covers are what led enthusiasts to refer to this engine as the “Panhead.”

The forks, headlight nacelle, dashboard, distinctive fenders, tombstone taillight and chrome speed stripes were among those components that received a re-design. In 1952, foot shifting became an option, in 1958 rear suspension became standard with the introduction of the Duo-Glide, and in 1965 electric starting came along with the Electra-Glide, the last model Panhead. In 1966 a new OHV engine design came on line, the one we now refer to as the Shovelhead.
There are numerous Panheads, 1948 to 1965 on display in the Museum for comparison of engineering and design features.