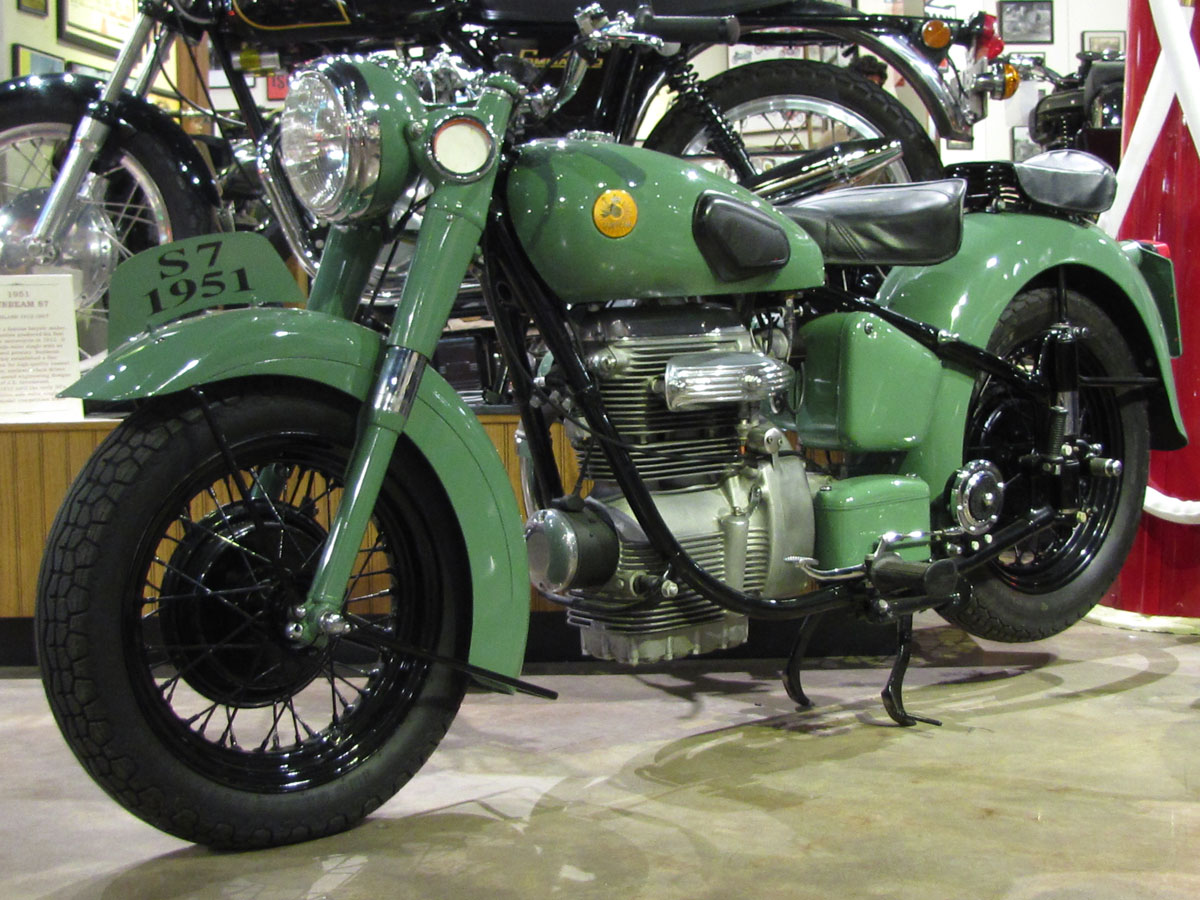 During its development the Sunbeam S7 was plagued with vibration and misguided engineering approaches. Yet today the Sunbeam S7 seems a handsome heavyweight machine distinguished by shaft drive, an overhead camshaft engine, “balloon tires,” rounded fenders and its Mist Green, silver or black paint.

In the course of being a manufacturer of high quality bicycles, Sunbeam’s founder, John Marston was also a Japanner, one skilled at applying black lacquer to bicycle or motorcycle parts, baking them for a hard and shiny finish such as was used on Henry Ford’s Model T. At the age of 76 he branched out into motorcycle manufacture. Most of his early Sunbeams used engines sourced from MAG or J.A.P. and some big-bore Sunbeams were prime for sidecar use. With the Sunbeam name being sold to BSA in 1943, the end of the original Marston/Sunbeam line came about.

The S7 design was the work of independent designer Erling Poppe who based it around the BMW R75 since BMW manufacturing rights were given to BSA as part of the War Reparations. The double-cradle frame with plunger rear suspension and a telescopic fork resemble the BMW, but the engine unit was completely new. At 487cc, the engine was a parallel twin turned around so that the crankshaft ran in line with the frame.

The first S7’s were produced just after World War II, 1949 and incorporated some 30 patented design features. But the worm gear final drive was fragile, and the fix was to lessen stress by decreasing engine output! The in-line twin vibrated calling for rubber engine mounting, which called for a flexible exhaust pipe connection. Shifts in focus of the mother company, BSA, sidelined the Sunbeam brand for good in 1956. In concept the S7 and the later S8 were good designs you could see working today. But they needed further engineering work. When you visit the National Motorcycle Museum you can study the Sunbeam, and also several BMWs for comparison.